Lightbourne requested Privy Council to sit in Jamaica before 2010 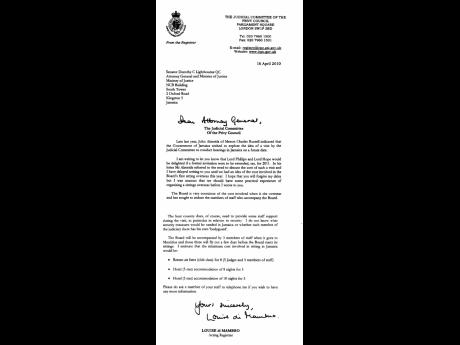 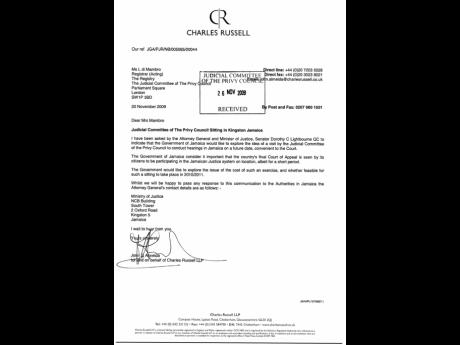 The Judicial Committee of the Privy Council has confirmed that a letter presented to the Senate by Marlene Malahoo Forte on Thursday was in fact an authentic correspondence from the United Kingdom-based final court in 2010 to former justice minister Dorothy Lightbourne.

However, prior to its correspondence with the Jamaican authorities, John G. Almeida of the law firm Charles Russell in the United Kingdom had written to L di Mambro, acting registrar of the Judicial Committee of the Privy Council in London in November 2009 on behalf of the Jamaican Government.

"The Government of Jamaica considers it important that the country's final court of appeal is seen by its citizens to be participating in the Jamaican justice system on location, albeit for a short period," Almeida stated.

When The Gleaner contacted Almeida for comment on the issue, the attorney said the policy of the law firm to which he is employed is that it does not comment "on such matters and enter the political arena".

In a statement yesterday, Minister of Justice Senator Mark Golding said he received two emails from the Privy Council in London with two letters attached. The first, dated November 29, 2009, to the Privy Council, came from John Almeida of the London-based law firm Charles Russell. The second letter, dated April 16, 2010, was from the Registrar of the Privy Council.

In the letter from the Registrar, the Privy Council said that if it were to visit Jamaica, the Jamaican Government would have to bear the costs of return air fares in club class for eight persons, in addition to covering the costs of five-star hotel accommodation for eight nights for five judges and 10 nights for three support staff. The costs for security arrangements formed part of the expense package.

According to Golding, unlike the Caribbean Court of Justice (CCJ), the Privy Council is not established to operate as an itinerant court. "While the Privy Council has been willing, over the past five years, occasionally to visit other countries to hear appeals, this is at a considerable cost to the host countries. Furthermore, given that the judges of the Privy Council have, as their primary duty, the hearing of domestic UK appeals in their capacity as judges of the UK Supreme Court, the scheduling of visits to other countries will need to take that into account."

In contrast, when the five CCJ judges and their support staff visited Jamaica to hear the Shanique Myrie case, the costs of the airfare, accommodation, and meals for the CCJ judges and accompanying personnel were all paid for by the CCJ itself.

The Ministry of Justice's records show that the Government incurred expenditure totalling J$1,032,755 in hosting their visit to cover the venue rental at the Jamaica Conference Centre, close-protection officers and judges' orderlies, Internet service, and protocol cars.