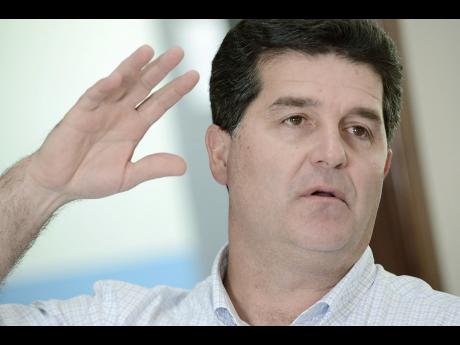 The identity of persons and entities that give under $1 million in campaign contribution is to be kept secret by the country's electoral authorities even as one of Jamaica's most prominent private sector bodies - the Private Sector Organisation of Jamaica (PSOJ) - calls for greater transparency.

A landmark campaign-finance bill, which seeks to amend the Representation of the People Act to regulate the financing of political parties and candidates, is proposing that the Electoral Commission of Jamaica (ECJ) publishes only contributions of $1 million or more made to registered political parties or candidates.

"We need to move beyond that as a country, and I think the time has come where we need complete transparency in all areas of politics and governance," PSOJ President William Mahfood said yesterday.

He insisted that every donation should be publicly disclosed.

"We should have that same level of transparency as you would now find in the United States or most developed countries. Maybe we are not there now, but as our culture and our maturity develop, maybe we can get to that stage," Mahfood said.

The bill, which was tabled in the House of Representatives on Tuesday, proposes that political parties and candidates be required to furnish the ECJ with all instances of campaign contributions of $250,000 or more.

However, after each election, the ECJ will only be required to publish only the total contributions received by each registered political party during the reporting period and a list of all contributions of $1 million or more received by each party or candidate. The bill defines the campaign period as the day on which the date for an election has been announced, or the last day of the Government's 54 months in office, and ending 24 hours before Election Day.

The bill creates a distinction between contributions and contributor, defining the latter as a person or an entity that makes a contribution, which is any money, gift in kind, or any other benefit which can be computed in terms of money for the purpose of carrying out the activities of a party or candidate.

The definition includes any loans for the purposes of supporting or opposing the candidature of another person for the purpose of influencing an election.

Mahfood told The Gleaner yesterday that he yearns for the day when all donations to political parties are made public. He said, however, that there was a concern that the society was not mature enough to get to that point.

"People are worried about reprisal. If one party wins and gets into power, then there would be some sort of vindictive act against them," the PSOJ boss said.

"I am not saying that we are going to get it today or tomorrow, but this legislation is going to get us on that track," he said.

Five companies - GraceKennedy, Scotiabank, Jamaica Money Market Brokers, Sagicor, and ICD Group - declared contributions totalling J$69.5 million to the People's National Party (PNP) and the Jamaica Labour Party (JLP) for the 2011 general-election campaign. Asked yesterday whether the PSOJ would be encouraging its members to make similar public disclosures in the upcoming election, Mahfood said he would bring it up at the next council meeting.

Meanwhile, the campaign-finance bill proposes that persons or companies who are the beneficiaries of government contracts of at least $500,000 will be required to declare any political contribution being made within two years of getting such contract.

The bill also proposes that a candidate or registered political party that accepts a contribution from an impermissible donor be subjected to a fine of up to $3 million or be imprisoned for 12 months if convicted in a Resident Magistrate's Court.

Political parties or candidates who receive a contribution from an impermissible donor have 30 days to return the contribution. If the identity of the contributor has not been disclosed and cannot be ascertained by the taking of reasonable measures, the political party or candidate must hand the money over to the accountant general for it to be placed in the Consolidated Fund.

Political parties and candidates are required to issue a receipt to persons who make contributions of $250,000 or more. These political parties are also required to itemise statements of the values of all contribution - cash or kind - of a value of $250,000 or more received during the campaign period. The report should state the name, address and occupation or description of each contributor.

This report should be submitted to the Electoral Commission with 180 days after the day of an election. Having received this report, the ECJ is then required to make certain disclosure, but there is no requirement for the name of the donor to be made public.

In the United States, candidates must identify individuals who give them more than US$200 in an election cycle. Additionally, they must disclose expenditures exceeding US$200 per election cycle to any individual or vendor.