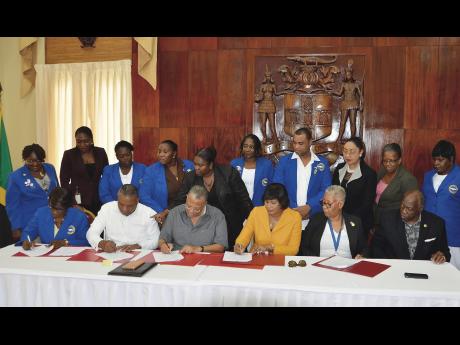 Contributed
Prime Minister Portia Simpson Miller (fourthleft) and representatives from the Government and the Nurses Association of Jamaica (NAJ) sign the Heads of Agreement for the Contract Period 2015-2017 between the Government of Jamaica and the Nurses Association of Jamaica, which represents registered nurses in the government service, yesterday at Jamaica House. With the prime minister are (from left, seated) NAJ General Secretary Zetta Bruff; Horace Dalley, minister without portfolio in the Ministry of Finance and Planning; Dr Peter Phillips, minister of finance and planning; NAJ President Janett Coore Farr; and Dr Fenton Ferguson, minister of health. Other representatives of the NAJ and the health sector look on.

ALTHOUGH FAR from getting the salary increase they wanted, the nurses have been appeased by the allowances and non-monetary grants they will receive under

the wage agreement they signed

yesterday, finally ending the standoff between themselves and the Government.

"Overall, the negotiations went quite well, and I don't think we came out too badly. We did not get the 50 per cent and the 30 per cent in terms of salary, but fared (well) in terms of the allowances and non-monetary allowances that we were given, and the members are satisfied with that," Janet Farr, president of the Nurses Association of Jamaica (NAJ), told The Gleaner.

"We didn't get more than the seven per cent in salary increase, which is four in the first year and three in the second year, but we are happy for the awards."

After months of deliberations, which at one stage led to a sick-out, the NAJ, which represents the registered nurses in government service, becomes the seventh public-sector group to sign the wage agreement for the contract period 2015-2017.

In April, the nurses submitted to the Government a 36-point claim for improvements in wages and fringe benefits.

Farr said under the concluded agreement, the payment of outstanding amounts for the health sector reclassification exercise would be made to the nurses this November and in January 2016.

"This was one of the bones of contention as it was initially proposed to be done in February next year. Now, it has been settled," she said.

The nurses have also been given 20 acres of land - 10 in Trelawny and the other 10 between St Mary and St Thomas.

Other allowances, including for uniforms, were increased by seven or 10 per cent.

"The association also got a brand-new bus, and we thank them very much for that," Farr added.

Following the signing at Jamaica House yesterday, Minister with responsibility for the Public Service, Horace Dalley, said he was "pleased that the negotiation with the NAJ has now concluded, and the Government of Jamaica is appreciative of the support and understanding from the NAJ over the period of the negotiations. Further, while we were not able to satisfy all the claims as initially proposed, the NAJ knows that this settlement is the best that the Government can do given the tight fiscal space within which we operate".

Hailing the country's nurses as "God's angels on Earth", Prime Minister Portia Simpson Miller expressed gratitude to them for continuing to support the ongoing Economic Reform Programme and accepting the Government's wage offer.

"We understand the working conditions and the yeoman sacrifice that our nurses give daily to provide world-class service and regret that we cannot afford to give all that is being requested and that you so truly deserve," the prime minister said.