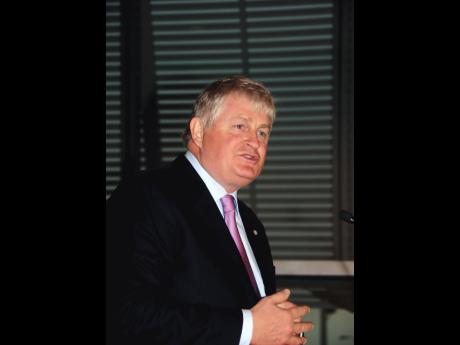 Five companies - GraceKennedy, Scotiabank, Jamaica Money Market Brokers, Sagicor, and ICD Group - declared contributions totalling J$69.5 million to the People's National Party (PNP) and the Jamaica Labour Party (JLP) in the lead-up to the 2011 general election and Digicel could be added to that list this time around.

Chairman of the Digicel Group Denis O'Brien says the company has never considered the public disclosure of political contributions but it is something its board will now discuss.

"We never really thought about that but we have always made political donations on an equal basis because that is the only way," O'Brien told The Sunday Gleaner in an exclusive interview last Friday.

"I think most companies in Jamaica now contribute to the political process and are asked for political donations, and we probably feel that the only way is to be equal about it because we are a foreign-direct investor and I am not a Jamaican, so I don't have strong views about who is in power," said O'Brien.

He added that Digicel is upbeat and confident in the direction Jamaica is going and expects whichever party to form the next Government will continue on that path.

The issue of public disclosure of campaign financing has been placed back on the front burner in recent weeks, following indications from the PNP that Prime Minister Portia Simpson Miller will call the next general election shortly.

Last Tuesday, a landmark campaign-financing bill which seeks to amend the Representation of the People Act to regulate the financing of political parties and candidates was tabled in Parliament.

The bill proposes that the Electoral Commission of Jamaica (ECJ) publishes contributions of $1 million or more made to registered political parties or candidates, a move that president of the Private Sector Organisation of Jamaica, William Mahfood, believes does not go far enough.

"We need to move beyond that as a country, and I think the time has come where we need complete transparency in all areas of politics and governance," Mahfood told The Gleaner as he insisted that every political donation should be publicly disclosed.

"We should have that same level of transparency as you would now find in the United States or most developed countries. Maybe we are not there now, but as our culture and our maturity develop, maybe we can get to that stage," said Mahfood.

The bill proposes that political parties and candidates be required to furnish the ECJ with all instances of campaign contributions of $250,000 or more.