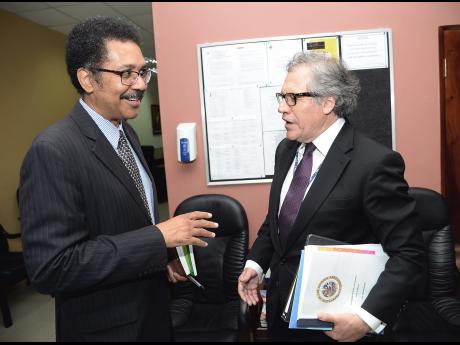 Stephen Vasciannie, former Jamaican ambassador to the Organisation of American States (OAS), says the time has come for Jamaica to attach greater importance to the role of the regional political body.

"In Jamaica, we tend not to pay sufficient regard to the OAS, which is an organisation which has important means and interest in CARICOM states," Vasciannie, a professor in the Faculty of Law at the University of the West Indies (UWI), Mona, said yesterday.

Vasciannie was speaking with The Gleaner as OAS Secretary General Luis Almagro Lemes visited the UWI, Mona, to sign a memorandum of understanding with the institution under a programme geared at advancing the quality and diversity of governance programmes offered by the university.

Almagro also delivered a lecture to about 200 law students on the role of the OAS in a changing hemisphere.

Arguing that there has been an under-representation of Caribbean people within the power structure of the OAS, Vasciannie said it was time that Jamaica and other countries lead the way in ensuring that change that is now taking place continues.

"We need to insist upon it," the ambassador said.

Vasciannie said it was hoped that this would mark the start of even greater collaboration between the UWI and the OAS. He also expressed the desire for Jamaica to seek greater partnership with the OAS, especially in the areas of education, infrastructural efforts, democracy and working to deal with security matters, including cybercrimes.

"We need, as a country, to tap into areas in which the OAS has special competencies," Vasciannie said.

"We know that the present secretary general is willing to enhance the interest of the organisation in the Caribbean, so we should take advantage of that," Vasciannie said.

He noted that Jamaica has benefited significantly from membership in the OAS, pointing, for example, to the area of human rights.

"It has provided guidance to us on ways in which we should treat people, and we are grateful for that. Even though sometimes we find that their decisions are not to our liking, we have been grateful for the general guidance," Vasciannie said.

In April, Vasciannie called upon the OAS to be more sensitive to the contribution that people of African descent have made to the Western Hemisphere.

He said that OAS member states should be prepared to ask why the organisation has so few symbols of achievement relating to persons of African descent, noting that there are people such as Martin Luther King Jr, Nanny of the Maroons, Bussa, Boukman, Dessalines, and Tacky who have helped to shape the history of the region.