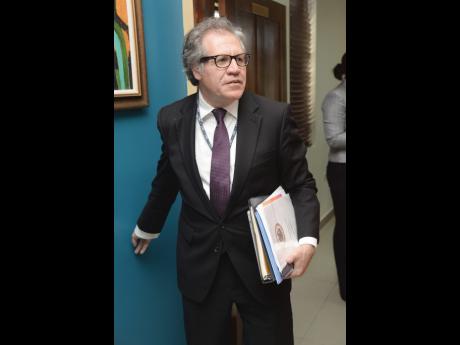 Secretary General of the Organization of American States (OAS), Luis Almagro Lemes, is welcoming the tabling of a campaign-finance bill in Jamaica's Parliament and has expressed the hope that other countries in Latin America and the Caribbean will adopt similar legislation.

Arguing that a campaign-finance regime is "essential and very necessary", Almagro said that the absence of such a framework exposes governments to significant weaknesses, chief among them being the influence of dirty money.

Last Tuesday, the Government tabled a bill in the House of Representatives seeking to amend the Representation of the People Act, reforming Jamaica's electoral campaign financing, out of the need to bolster the transparency and accountability of elected officials and to reduce corruption and improper influence in public life.

"In fact, it may end all nasty influences ... in the future. When you pass a law like this, I expect that has to be according to maximum standards, and without double standards in order to keep the threat from democracy," he added.

The OAS secretary general, who is in Jamaica for the signing of a memorandum of understanding with the University of the West Indies, Mona, to promote governance education, said dirty money poses a threat to democracy.

"I think what Jamaica is doing is a very substantial step that ... other Latin American and Caribbean countries will have to replicate in the near future," the OAS secretary general said.

"Jamaica is a reference in the Caribbean, and so when we do things here and we work to strengthen democracy in Jamaica, it has a mirror effect on some other countries," he added.

Under the proposed law, registered political parties and candidates for elections will have to report to the Electoral Commission of Jamaica donations and contributions of J$250,000 or more.

Almagro said the OAS believes it is important to keep track of the changes in political systems and to make sure that the political system finds solutions for the people.

He argued that without campaign-finance reform, there is the possibility that democracy can be captured by people of unsavoury character.

"It is the main problem that we have this day in the continent. Narco traffic and organised crime are very close to politics these days, and it (campaign-financing law) is a way to keep that money out of the political system, and that is very necessary to work every single issue that you have to work after that," Almagro said.

Jamaica's campaign-finance bill proposes making it illegal to accept campaign contributions from any person or entity whose existence is, or activities are, illegal under any law.