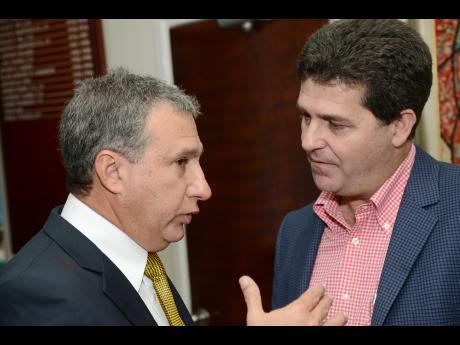 Two of the country's leading private-sector organisations are demand-ing greater accountability for the tragic deaths of 19 premature babies, after they were infected during a bacterial outbreak at two of Jamaica's major public hospitals.

Both the Jamaica Manu-facturers' Association (JMA) and the Private Sector Organisation of Jamaica (PSOJ) issued calls yesterday for the Office of the Prime Minister to make the responsible parties pay for the egregious circumstances that resulted in four outbreaks of the klebsiella and serratia bacteria at the University Hospital of the West Indies (UHWI) and Cornwall Regional Hospital over a five-month period.

Since June, 42 premature babies have been infected from the outbreaks, resulting in the deaths of 12 babies at UHWI and seven at Cornwall Regional.

Calling for transparency in addressing the outbreak, PSOJ President William Mahfood told The Gleaner: "We need, as a country, to ask ... why and who are responsible, and whoever those people are, they need to be held accountable."

Added Mahfood: "The time has come for us to stop pushing things under the carpet and to ensure that accountability and proper governance is the order of the day for us going forward."

In a statement, Metry Seaga, president of the JMA, said he was deeply concerned over the lack of transparency and accountability of the competent authorities' handling of the situation.

"The JMA is concerned at the handling of the matter now being aired publicly of the deaths of 19 babies between June and November this year, while in the care of public hospitals, by two bacterial infections," Seaga said.

Health Minister Dr Fenton Ferguson has denied knowledge of the outbreaks before the matter was made public on October 16 and has resisted calls to resign.

Prime Minister Portia Simpson Miller has indicated that she will not remove him.

Chief medical officer in the health ministry, Dr Marion Bullock DuCasse, has also indicated she has no intention of stepping down, although she has come under pressure for her late response to information sent to her on the outbreaks. It was revealed that she was informed of the outbreak on September 7.

Dr Cecil White, chief executive officer at UHWI, and Professor Trevor McCartney, medical chief of staff, both resigned after the hospital issued a statement on the scandal that has dominated conversation across the country in recent few weeks.

Described as "one-line letters of resignation that offered no reason", McCartney's resignation took effect on October 31, while White was initially to demit office on January 31 next year.

White and McCartney, along with Sterling Soares, chairman of the board at UHWI, have been subpoenaed by the Office of the Public Defender to answer to the charges.

Calls continue to come in from various quarters for more heads to roll at the health ministry, as well as the Cornwall Regional Hospital.

On the weekend, Opposition Spokesman on Finance Audley Shaw accused Ferguson of dishonesty, stating: "On the day the audit team arrived at Cornwall Regional Hospital, there was an infection outbreak in the neonatal unit ... . Dr Ferguson has lied to the people of Jamaica that October 16 was the first they heard of it ... . The question is, 'What action they took?' ... No action was taken!"

Shaw, who was addressing a Jamaica Labour Party mass rally in May Pen, Clarendon, was making reference to a reportedly leaked copy of the Audit Report of the Regional Health Authorities done by the Ministry of Health, which the ministry has refused to make public.

Seaga called for the prime minister "to insist on the immediate release of the full audit to the public and that the necessary persons are held accountable for this tragedy, where applicable".

He continued: "We find it egregious that the minister has ordered an audit and has chosen not to release it to the public, especially in light of the circumstances coming to the fore now.

After outcry from both health-care workers and the general public in May, Ferguson had directed the four regional health authorities to conduct a comprehensive audit of their operations.

Following the release of a summary of the report on September 2, The Gleaner had requested a full copy under the Access to Information Act. However, a response from the health ministry yesterday stated that the request had been forwarded to the Attorney General's Chambers.

"We have been advised by the Attorney General's Chambers that the matter is still being reviewed," the ministry said.

"We note that the period of extension is to expire November 2, 2015 and apologise for the unavoidable delay being experienced. Should you wish to take the matter further, please avail yourself of the provisions of Part V of the Access to Information Act. Nonetheless, you will be updated as soon as we are in receipt of a response from the Attorney General's Chambers."

The ministry has said it chose not to release the full report because it did not want the public to have negative views of the implicated public-health facilities.

"We would not want to specifically give you the names of the hospitals. We don't want to tell you which particular hospital has which shortage. It's really not the best thing to do. I don't think this is good to put those out in the public space at this time," Dr Kevin Harvey, permanent secretary in the health ministry, said at the time.

Last night, Soares announced that Kevin Allen, senior director of finance at the hospital, has been appointed to act as chief executive officer, and that White had moved up his departure date as the board felt it was in the hospital's best interest to appoint someone to act immediately.

In addition, Soares said the board has decided to appoint Dr Carl Bruce, consultant neurosurgeon, to act as senior director, clinical services, in the wake of McCartney's resignation.