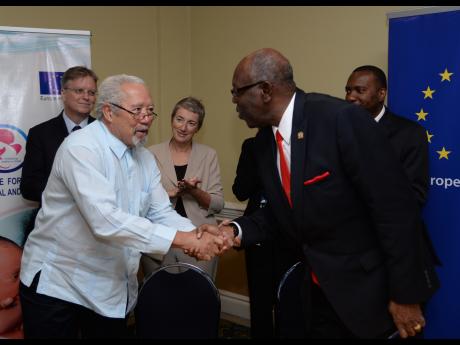 Describing as a tragedy the deaths of 19 premature babies who were infected with klebsiella and serratia bacteria during four outbreaks at two of the island's major public hospitals, Ambassador Paola Amadei, head of delegation for the European Union (EU) to Jamaica, says a critical objective must now be to put the necessary things in place to prevent a repeat.

"I think it is a tragedy for everybody. I know we will never be able to avoid death, but the objective is to put everything in place in order that preventable deaths can be prevented and avoided," Amadei told The Gleaner yesterday.

"Each single mother, baby, counts, and, therefore, I think the objective of everybody is going further than the standard, in order to avoid all of the preventable deaths."

The ambassador was speaking following the signing of $253.1 million worth of contracts to improve neonatal and maternal care in the public-health sector, which took place at the Knutsford Court Hotel in St Andrew.

The contracts were part of initiatives under the $2.9-billion Programme for the Reduction of Maternal and Child Mortality (PROMAC), which is a project of the Ministry of Health started in 2013.

Funded by the EU, its objective is to reduce the incidence of neonatal and maternal deaths in Jamaica.

Six ambulances will also be purchased, as well as equipment for high-dependency units at several hospitals.

Amadei said aside from improving support, infrastructure, equipment and overall care in the public-health sector, among the objectives of the programme is to both raise awareness in expectant mothers, and aid in the training of health-care workers.

"It is important that mothers are aware about prevention, get regular check-ups, in order that problems that can notably lead to pre-term deliveries can be avoided. The second step is having better training in larger groups of doctors, nurses, primary health workers, trained specifically, which will improve the quality of support and care that they can provide," she said.

"The other aspect is the infrastructure and equipment, upgrading and developing the high-dependency units in the central and regional hospitals."

The ambassador continued: "The MDGs (Millennium Development Goals), in the case of Jamaica, were to bring down the numbers of deaths of babies to nine per 1,000 births, and Jamaica is approaching this objective, but it is not just obtaining it but maintaining it and continually improving on it."

Amadei said the $2.9 billion (€$22 million) under PROMAC represents the largest grant from the EU to Jamaica's health sector.

Partnering with Jamaica for 40 years, the EU has funded more than €$1 billion in grants to the country.