Highway 2000 operators will be compensated if affected by Mandela roadwork 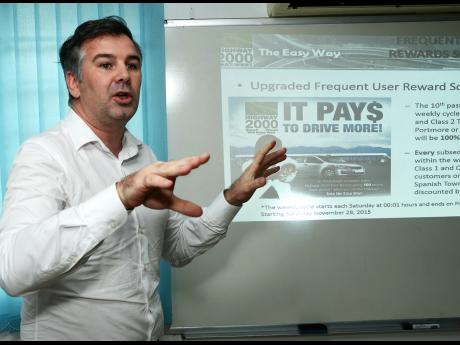 Guillaume Allain, managing director of TransJamaican Highway, says if traffic is reduced and revenue lost after improvements are carried out on the Mandela Highway, he is certain the operators of Highway 2000 will be compensated.

Allain was speaking with The Gleaner during a media presentation held at the Portmore Toll Plaza in St Catherine yesterday.

His comments came in response to a report in The Sunday Gleaner that pointed to a clause in the agreement between the Government and Highway 2000 which requires Jamaica to compensate the developer and concessionaire, TransJamaican Highway, if traffic is reduced because of improvements on an alternative route to the Highway 2000.

The improvements to Mandela Highway are intended to reduce flooding along roadway and better accommodate present and future traffic demands.

Allain said although compensation was part of the agreement, it would depend on a traffic survey that would be done after the improvements to Mandela Highway by an independent traffic adviser to be named by National Road Operating and Constructing Company and TransJamaican Highway.

"If an impact is seen, there will be compensation, because the contract states it, but we would first assess our loss and measure its impact on us," Allain added.