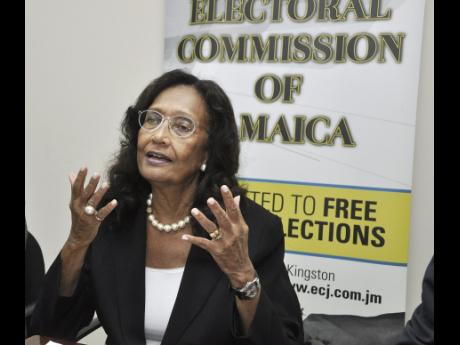 Dorothy Pine-McLarty, chairman of the Electoral Commission of Jamaica

Dorothy Pine-McLarty, chair of the Electoral Commission of Jamaica (ECJ), said yesterday that the electoral authorities is not in favour of any amendment being made by the House of Representatives to the current campaign finance bill before Parliament.

Phillip Paulwell, leader of government business in the House of Representatives, told The Gleaner on Wednesday that Cabinet has already advised the ECJ that it would not support the clause for state funding of political campaigns.

"I have already written to the selected members of the ECJ, and I do believe they will give support," said Paulwell, who is also minister with responsibility for electoral affairs.

However, Pine-McLarty, in a media release yesterday, said a long-established tradition would be broken were the amendment to take place.

"In October 2015, the leader of government business and minister responsible for electoral matters expressed to the Commission the Government's discontinued support of the said provision. The Commission took the view that the change in position of the ruling party should not be the sole basis for the Commission to reverse its position," the chairman said.

BILL SHOULD GO TO PARLIAMENT

"The Commission is of the strong view that the Bill should go to Parliament and the Parliament, if it so chooses, may recommend that the matter be given further consideration by the Commission. This, in the opinion of the Commission, would preserve the long-established convention which is absolutely necessary for the electoral process to maintain its independence," she added.

Pine-McLarty noted that the Electoral Advisory Committee, the forerunner to the ECJ, which was created in 1979, was designed to remove direct control of the electoral process from the political directorate.

She said for the purposes of inclusion and participation of the political parties in the electoral process, the legislation provided for two representatives, each to be nominated by the prime minister and the leader of the opposition, respectively.

She said reports to Parliament are unanimously agreed to and signed by all members of the ECJ, and would, therefore, also reflect the views of the political parties.

"This is what has given rise to the convention, which essentially suggests that the party in power would not use its majority in the House to influence the direction of electoral matters," Pine-McLarty said.

But Paulwell said that having reviewed the clause, "we would not be able to convince our side to support it".

"The Jamaican electorate now, they are very mindful and very cagey about political parties receiving funds from the State," Paulwell had told The Gleaner.

"Based on the canvassing, it is not a matter that the electorate would support, and so we didn't want to upset and anger the electorate."