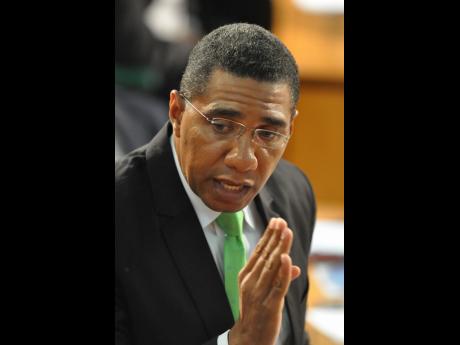 "MERELY SHIELDING her minister and shifting account-ability and responsibility away from him" is how Opposition Leader Andrew Holness describes the move by Prime Minister Portia Simpson Miller to reshuffle embattled Health Minister Dr Fenton Ferguson to another ministry.

"The prime minister's actions show a very high tolerance and patience with failure and under-performance, which places the health and security of the people of Jamaica at risk," Holness said.

Yesterday, the prime minister heeded to pressure and reassigned Ferguson to the labour and social security ministry, with Horace Dalley now in charge of the health ministry.

Several calls have come in for Ferguson's resignation after the latest crisis in the health sector, which resulted in the deaths of 19 premature babies.

"The minister should have been removed a long time ago. The fact is that Minister Ferguson's performance and execution of his duties as the minister of health does not recommend him to continue to hold any ministerial office in any Cabinet," the opposition leader said.

"We expect that having released the report, the prime minister should hold to account other chief personnel and political appointees responsible for the shortcomings in policy and administration. This will set an example of accountability not just in the Ministry of Health, but throughout the entire Government."