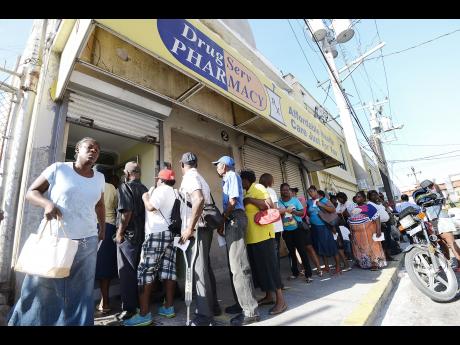 Ricardo Makyn
Persons gather at the Union Square branch of the DrugServ Pharmacy to fill prescriptions at subsidised prices.

The government, through the National Health Fund (NHF), has spent close to $1 billion over the last year to help Jamaicans battling hypertension.

With more than 281,000 Jamaicans seeking help from the NHF this year to defeat the disease dubbed the 'silent killer', the entity has provided the money in the form of drugs subsidy up to the end of September this year.

The number of Jamaicans seeking help to treat hypertension has doubled, and in many cases tripled the number seeking drug subsidies to treat other medical conditions such as diabetes, cancer, arthritis and high cholesterol.

"The incidence of hypertension is lifestyle-related and the major risk factors are obesity, diet, inadequate physical activity, alcohol consumption and tobacco use, stress and the ageing process," the NHF noted.

The drugs subsidised to deal with this condition include enalapril, nifedipine and hydrochlorothiazide.

According to data from the Jamaica Health and Lifestyle Survey, the number of Jamaicans with hypertension and prehypertension increased from 21 per cent to 25 per cent and 30 per cent to 35 per cent, respectively, between 2000-2001 and 2007-2008.

Director of the Epidemiology Research Unit at the University of the West Indies, Professor Rainford Wilks, said that while another survey is now due, he does not believe the figures have decreased since 2008.

According to Wilks, they are preparing to undertake the next Health and Lifestyle Survey come January 2016.

"Obesity, lack of activity and too much salt in the diet are the three big issues that are of concern to us. Unless we are able to arrest those, we are not likely to see any cauterisation of the trend in increase in hypertension," said Wilks.

"People's sensitivity to the issue continues to be low, because it's not a disease that causes symptoms, so they don't really take it seriously until there are complications like stroke or heart attack or kidney problem or something like that," he added.

General practitioner Dr Jacqueline Campbell said she, too, is concerned that people have not been making the necessary lifestyle changes to reduce their risk.

One of the primary challenges, she said, to reducing the number of individuals being diagnosed with hypertension is the fact that Jamaicans generally tend to eat a lot.

"Some people eat too much food. People eat with the eyes. So if you give them a good enough portion and recommend what ... [is the correct portion of a particular food], they are going to say, 'but I can't eat just that'," she said.

"They are not looking at the impact of salt consumption because many of our food contain too much salt and people add too much salt," the doctor explained.