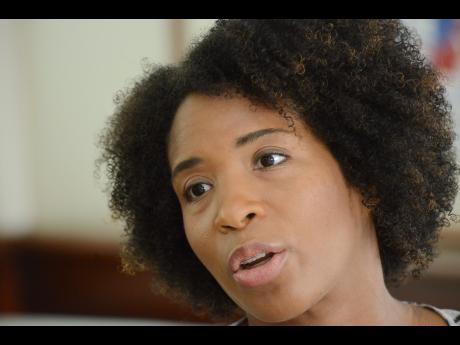 Lupus specialist Dr Desiree Tulloch Reid fought back the tears at a Gleaner Editors' Forum last week, as she recounted the struggles endured by patients stricken with the lifelong affliction.

Her voice broke as she muttered: "I am so blown away sometimes; it is emotive for me because I work with very brave people." She voiced a constant message for those living with lupus: "You are not alone".

"It is really inspiring, and when asked what keeps us going, there is nothing like being on the front line with those involved," added Tulloch-Reid, still battling her emotions

"When you get an understanding of what people live through and the effort they put in to stay alive, you have to validate that and give them the information and tools that they need," she added.

A specialist in internal medicine, rheumatology and lupus, Tulloch-Reid heads the division at the Kingston Public Hospital (KPH).

Along with Dr Charmaine Watson Brown, head of the Nephrology Unit at the largest tertiary referral centre in the English-speaking Caribbean, Tulloch-Reid and her teammates, including president of the Lupus Foundation, Dr Stacy Davis, and treasurer Lois Murray, a lawyer by profession, have signalled that all's not lost as they plough on in the pursuit of a healthier day for their charges.

Tulloch-Reid's voice continued to shake as she spoke about the misunderstanding of people engaged in a never-ending battle being waged against their immune systems.

She revealed that she has been confronted by the debilitating fatigue in numerous patients, conflicted by never-ending joint pains.

Then there are the headaches and fever, swelling of the feet, hands and around the eyes, along with anaemia (low numbers of red blood cells or low total blood volume).

"There is a lot of judgement that have been made about people with lupus, how engaged and responsible they are," lamented Tulloch-Reid.

"People go to great efforts to make sure that they have the medication that they need: Once they understand the role it is playing and the need for self-management, the compliance level is high," she asserted.

Added Tulloch-Reid: "People stand in long lines to get their drug, they go every month and have to take up to 20 pills per day.

"They go through all these efforts because they want to stay alive, they want to be well and so they do what it takes to stay well."

In bringing graphically to the fore the hardship and challenges being experienced by her patients, Tulloch-Reid lamented: "It is very depressing."

She admitted that although lupus treatment is her speciality, along with rheumatology, she finds it impossible to rest until a special office for persons with lupus is up and running in Jamaica.

The dedicated warrior said she would not rest in the war against the disease until there is an office similar to the Jamaica Cancer Society, to which all lupus patients have access.

She disclosed that the budget for the initial project in setting up such an office is $2.8 million, of which approximately 40 per cent has been found.

Tulloch-Reid noted that the first phase would include the physical set-up of equipment and basic resources. This would also involve retaining staff and establishing clear policies and procedures, such as reporting as far as quality control is concerned.

On a monthly basis, it is estimated that the basic expenses for the office would be close to $300,000.

Tulloch-Reid said the intention is to establish an office for a number of purposes, including centralising activities to enable it to be more effective, by way of documentation and increasing accessibility.

"Just so that people can find us," she stressed.

But until then, Tulloch-Reid has been given a boost of sorts. "My definite impression is that the level of awareness in the population generally has grown substantially," she asserted.

"From what I recall, practising in Jamaica 15 years ago and coming back, I find that the awareness is greater; the outcomes, I suspect, are also greater," she added.

Tulloch-Reid noted that with the exception of one or two, drugs are available to treat lupus without cost for patients under her care.

"I run a lupus clinic of about 2,000 people and about 40 per cent have lupus ... it's a lot of people suffering from the disease," she said. "It has made a world of difference that there is access to care."