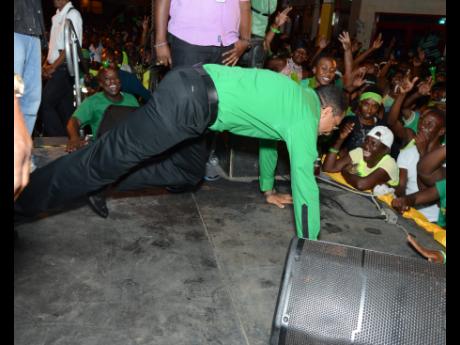 Ian Allen
Andrew Holness, leader of the Jamaica Labour Party, uses push-ups to show off to supporters that he is fitter than Prime Minister Portia Simpson Miller during a mass rally in Spanish Town, St Catherine, Sunday night. 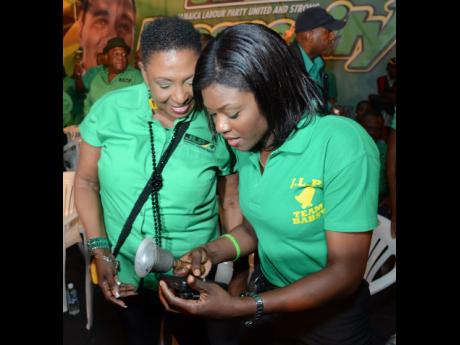 The huge turnout in the Jamaica Labour Party's (JLP) Central St Catherine stronghold on Sunday notwithstanding, the main targets of platform speakers were the throng of non-committed voters sitting on the political fence.

It was, however, Ferguson who had to absorb another round of battering as JLP Leader Andrew Holness, in a wide-ranging presentation, charged that Simpson Miller has refused to hold her ministers accountable.

"I am thankful that I was not born when Dr Ferguson was minister of health," he quipped.

Holness stressed that it was not enough that Ferguson - now at Labour and Social Security - was merely shifted to wreak havoc on another government ministry.

A defiant Holness signalled that he would not recant from his claim that under a People's National Party (PNP) administration, more Jamaicans are likely to perish by violent means.

He had added: "It is no joke business, because right now you have a greater chance of being murdered in your own community than being hit by a car, and it shouldn't be that way."

On the weekend, Holness charged that it was as a result of the weak leadership of Simpson Miller and her "cronies" in the PNP that Bunting has felt empowered to treat crime and violence with impunity.

For her part, host of the rally, Central St Catherine MP Olivia 'Babsy' Grange, declared "never again" as she rallied her huge support in her constituency to stand up against the treatment of the Government.

Grange urged the throng of women to hold hands in solidarity with the families of the 19 premature babies who lost their lives to klebsiella and serratia bacterial infections.

As she spoke in her "backyard", Grange urged the men in the crowd to take a stand with the women.

Grange also promised that she would be appealing to Holness to do something for the women who lost their children.

Citing Mike Henry and others who stepped aside when allegations were made against them, Grange said the JLP and PNP governments were distinguished by the way they handled allegations of wrongdoing.

She said while JLP members have allowed due process to vindicate them, the PNP habitually engages in cronyism at the expense of the well-being of Jamaicans.

Noting that the JLP has governed the country for only four of the last 25 years, Grange said: "Look at the condition the country is in."

She added: "Who must take the blame if someone runs the place for 21 of 25 years?"

According to her, every time the JLP stabilises the country, the PNP is voted in "to mash it up again".

"My advice to you is, don't let them do it again," she said.

Grange was supported by her councillor for the Spanish Town division, Kenisha Allen.

"Mama P, if you love the poor so much, why have you subjected mothers who can't afford private health care to (a man) who says that their babies are not real?" said Allen.

Letter of the day: Government, Opposition must unite to fight crime
Local Government entrenchment gets closer
Yes to CCJ - Gov't urges Opposition to cast aside party lines and vote for bill