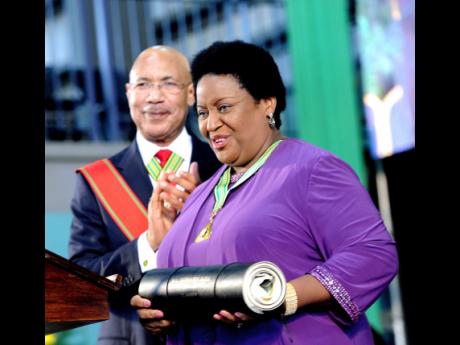 The new political ombudsman, whose statutory responsibility is to oversee and investigate adherence to Jamaica's Code of Political Conduct, will replace Bishop Herro Blair, who resigned in June 2013.

Yesterday. the Jamaica Labour Party (JLP) hinted it had no concerns about the individual selected for appointment.

The Gleaner was informed that the signing off on Parchment Brown was approved by all parties, including the Electoral Commission of Jamaica (ECJ).

In the meantime, Leader of Government Business in the House of Representatives Phillip Paulwell, while not confirming Parchment Brown's selection, said the appointment of a political ombudsman was imminent.

"The appointment of a political ombudsman is with the governor general, who has authority under the law to make the appointment," said Paulwell.

He added: "I am aware that the consultative process to achieve this is advanced. It is his appointment and not mine, but I know that it is imminent."

In September, The Gleaner reported that Johnson and Parchment Brown, a dispute-resolution specialist, were said to be the two persons shortlisted for the job.

At the time, Parchment Brown offered "no comment" when asked about the reported interest in her.

In the meantime, mounting allegations and counter allegations on the platforms of both political parties, have brought to sharp focus the absence of an ombudsman.

Chair of the ECJ Dorothy Pine McLarty informed The Gleaner that her team was engaged in consultations to identify and deal with some of the problems which have been surfacing.

With tensions mounting in the political space, the National Integrity Action (NIA) has sounded a call for the speedy appointment of a political ombudsman.

After JLP Leader Andrew Holness last Sunday urged voters to "Nyam dem out and vote dem out!", the NIA issued a release reminding the nation that vote-buying is a criminal offence.

The NIA noted that vote buying and vote selling are in clear breach of Sections 91 and 94 of the Representation of the People Act and attract a fine of $20,000 to $80,000 and/or imprisonment of not less than three, and no more than five years.

JLP General Secretary Dr Horace Chang yesterday defended Holness' comment, saying that it was the vote buyers who must be brought to book.

"The man who is inveigling the voter with incentives is the one who is doing something illegal," Chang contended.

Added Chang: "The Leader meant no harm, just that the receiver did nothing illegal, he should, therefore, take it, invest in something ... even as they vote with their conscience."

The NIA noted that vote buying and selling constitute clear violation of the political code of conduct, agreed to by both parties:

It pointed to a section that states: "Candidates or others acting on behalf of candidates must not use funds derived from any source, public or private, to improperly influence electoral choices."

Holness, on Sunday, accused the People's National Party (PNP) of vote buying and urged those approached to take the money, ask for more and vote the governing party out.