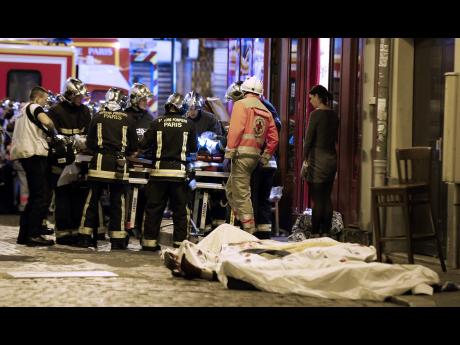 More than 100 people were killed yesterday in a series of terror attacks, the deadliest to hit Paris since World War II, French President Francois Hollande said, announcing that he was closing the country's borders and declaring a state of emergency.

Many of those killed were in a popular concert hall where patrons were taken hostage, police and medical officials said. The violence gripped the city in fear and recalled the horrors of the Charlie Hebdo carnage just 10 months ago.

The officials spoke on condition of anonymity because they were not authorised to be publicly named in the quickly moving investigation.

There was no immediate claim of responsibility for the series of attacks.

Hollande, in a televised address, said the nation would stand firm and united against the attackers.

"This is a terrible ordeal that again assails us," he said. "We know where it comes from, who these criminals are, who these terrorists are."

U.S. President Barack Obama, speaking to reporters in Washington, called the attacks on Paris an "outrageous attempt to terrorize innocent civilians". He vowed to do whatever it takes to help bring the perpetrators to justice.

Yesterday, automatic gunfire and blasts could be heard from the concert hall, and police officials confirmed that security forces had launched an assault there. Neither official could be named when discussing the ongoing operation, which several officials said involved dozens of hostages. Scores of police surrounded the building and sirens wailed throughout the neighbourhood.

Earlier Friday, two explosions were heard outside the Stade de France stadium north of Paris during a France-Germany friendly football match. A police union official said there were two suicide attacks and a bombing that killed at least three people.

The official, Gregory Goupil of the Alliance Police Nationale, whose region includes the area of the stadium, said explosions went off simultaneously near two entrances and a McDonalds.

An Associated Press reporter in the stadium Friday night heard two explosions loud enough to penetrate the sounds of cheering fans. Sirens were immediately heard and a helicopter was circling overhead. Hollande, who was in the stadium, was evacuated to an emergency meeting.

France has been on edge since deadly attacks by Islamic extremists in January on satirical newspaper Charlie Hebdo and a kosher grocery that left 20 dead, including the three attackers. The Charlie Hebdo attackers claimed links to extremists in Yemen, while the kosher market attacker claimed ties to the Islamic State group.