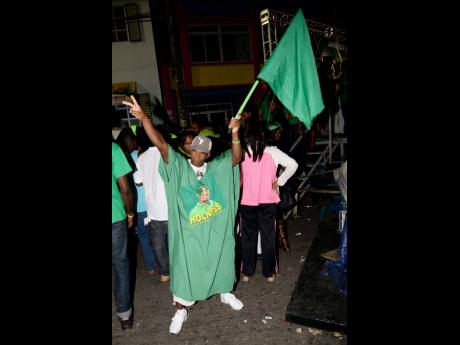 Jermaine Barnaby
This JLP supporter obviously bought several yards of cloth for his trip to a meeting in May Pen, Clarendon recently. 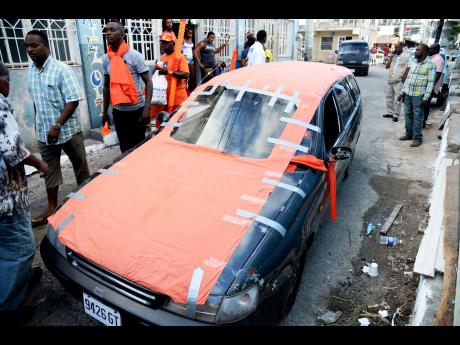 Local fabric suppliers and speciality clothing stores are enjoying a windfall from the ongoing election campaign, with the demand for green and orange cloth and marked shirts skyrocketing.

"Whenever there is a campaign coming up, there is always an increased demand (for orange and green shirts), Shanette Clarke, office manager at fabric giant LP Azar, told The Sunday Gleaner.

"Business has been great. We have sold quite a number of shirts and have had to reorder," added Clarke.

She said orange and green caps and rags have also been hot items, but shirts have been in the greatest demand, with 20,000 units having been sold since January, with the majority of this sale taking place in the last few months.

"We were prepared and still we sold out, but have shipped in more," said Clarke.

Having purchased the T-shirts, the next step for the political activists is to get their logos, messages and faces printed on them, and that is where places like T-shirt Express come in.

But despite having seen great interest in their services, persons have yet to follow through with placing actual orders, according to manager Bara Catt.

Catt said it is a trend for the parties to place orders close to when they are actually going to need them, with both parties usually providing the shirts. He disclosed that it cost $350 per shirt to print a total of 100 shirts back and front.

At Ping's Fabrics, officials said while they have not yet seen an upturn in business due to sales of orange and green cloth, but they expect things to pick up.

"We have not yet seen increased sales, but we normally see a slight increase when it comes around to election time," manager of the Orange Street branch, Jeremy Pearson, said.

Manager at the Constant Spring branch, Caroline Reid, said there is usually an increase in demand for orange and green fabric around conference time for decoration purposes, and closer to elections.

"I don't think you are going to see anything until the election is actually called. Both parties usually buy fabric when they have their conferences," said Reid.

Reid explained that they are aware that the parties use the colours, so they are mindful when placing orders to get surplus of the two colours.