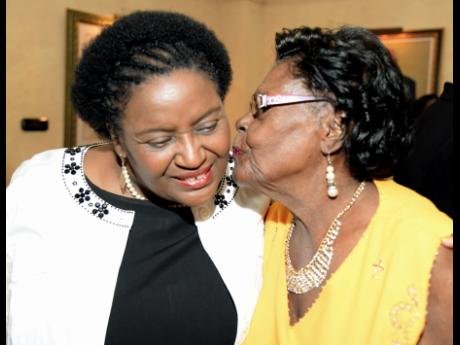 Jermaine Barnaby
Rosetta Parchment (right) plants a kiss on the cheek of her daughter, Donna Parchment Brown, following her swearing in as political ombudsman at King’s House in St Andrew yesterday.

Declaring that she stands ready to be an advocate, mediator and arbitrator for the safe conduct of Jamaica's elections, Donna Parchment Brown yesterday created history when she was sworn in as the first female political ombudsman and the fourth to hold that office in Jamaica since Independence.

Her predecessor, Bishop Herro Blair, who attended the swearing-in ceremony at King's House, hailed Parchment Brown as the right person for the job at this time, noting that she was well equipped and served with distinction and integrity for 11 years with him as co-chairman of the Peace Management Initiative.

Blair argued that as political ombudsman, Parchment Brown would have to exercise tolerance, perseverance and compassion, but noted that she would have to be "firm, frank and sometimes feisty in order to carry out her job".

"It is going to be hard. Maybe she will have to put on some blinders and run the race, because when you have to make decisions, you can't look on who is going to be affected, because sometimes your friends are there but you still have to do justice, and that's what it is all about, justice for all," said Blair.

Parchment Brown said her first order of business was to meet with the prime minister and opposition leader before getting settled.

The political ombudsman said she would be calling for all custodes to host signing events in all parishes for the candidates in the upcoming general election as they pledge to observe the Political Code of Conduct.

A specialist in mediation, Parchment Brown said she intends to use her training as a mediator to carry out her duties as referee in the sometimes divisive political process.

"I intend to have my eyes wide open; this is not a time for naivety, nor is it a time to be so puffed up that you are judgemental or lose sight of the genuine ebb and flow of the political process where it does no harm," she said.

Asked if she believed there was a need to review or revise the current Political Code of Conduct as was proposed by her predecessor, the new political ombudsman said she would be looking at the code and seeking audience with Blair to ascertain what changes he had contemplated.

"I will ask the political parties, too, whether there were things in (the code) that were not as effective. Whether there will be time to make changes is another matter, but we will certainly, apart from the signing of the code, if there are other matters that should surround the code, then I will make certain that those are part of the discourse and action," she said.

Asked to comment on a controversial statement made by Opposition Leader Andrew Holness, last week, on a political platform, where he encouraged Labourites to "nyam them out and vote them out (PNP politicians)", Parchment Brown said it was "unfortunate that over many, many years of our political life, this issue of vote, buying has continued to be there and we have heard over the years different utterances in relation to it".

"What I would ask is that as we go forward, both those who speak and those who listen will make good sense and reason prevail, and whatever we say, we want to have done with some humour - that we bring some humour and respect for one another into the process."