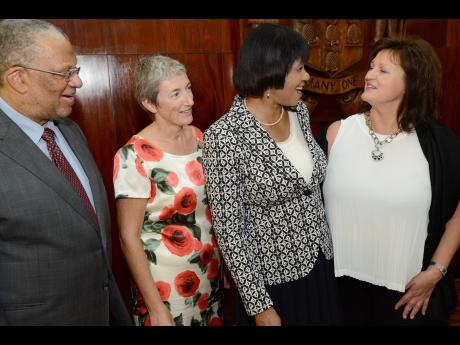 An expected boost to the living conditions of residents in sugar-dependent communities, in addition to a push for debt reduction, are some critical elements Prime Minister Portia Simpson Miller says are to be addressed through more than $2 billion in budget support from the European Union (EU).

Jamaica is the recipient of two budget support payments totalling $2.3 billion, as an activity to mark the 40th anniversary of partnership between Jamaica and the EU.

Addressing a handover ceremony held yesterday at the Office of the Prime Minister in St Andrew, Simpson Miller said growth and living standards continue to be issues of concern for the country and that she was determined to find solutions.

"The support in areas of debt reduction, growth, enhancement and poverty reduction in sugar-dependent areas is in keeping with the commitments of the Government of Jamaica and the national economic reform programme," the prime minister said.

"These payments are being disbursed because my administration has consistently met the economic targets. I believe these payments represent a vote of confidence by the EU in the Government's successful implementation of the economic reform programme and, most importantly, improving the standard of living for the Jamaican people."

Agriculture Minister Derrick Kellier, welcoming the contribution from the EU, indicated that poverty and improving living standards are important issues for persons who are dependent on the agricultural sector.

"We do appreciate the support we have been getting from the EU over the years in agriculture. The programmes give us support for the housing programme, through which we remove people from the sugar barracks into good housing and proper infrastructure, because we want communities that are wholesome," Kellier said.

"Parishes such as St Thomas, St Catherine, Clarendon, Westmoreland, and parts of Trelawny will be assisted as we continue to do our part to alleviate poverty."