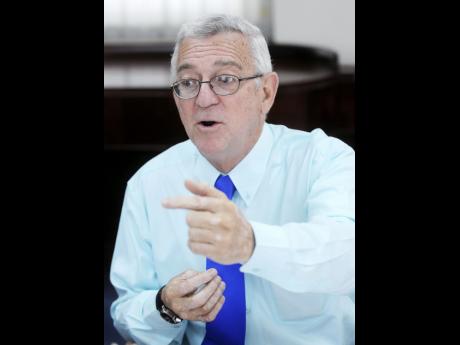 Education Minister Ronald Thwaites is encouraging more of the country's secondary-level students to seek to matriculate to a college or university.

He said that guidance and support are available for students who wish to pursue advanced studies.

"We need to increase from about 22 per cent to 40 per cent, in short order, the number of our high school graduates who go on to college or university.

"There is assistance which can be made available to those who are really serious ... about advancing their professional and academic education," Thwaites said.

He was speaking at Thursday's official launch of the sixth-form programme at the York Castle High School in Brown's Town, St Ann.

Thwaites congratulated the school's management, headed by principal Raymond Treasure, for the hard work which resulted in the ministry granting the institution sixth-form status.

"Any high school which is able to produce candidates who are sufficiently able to matriculate to sixth form should be encouraged ... and the appropriate adjustments in the establishment of teachers and in the size of classes must follow," he pointed out.

Thwaites noted that the programme had been a success so far, and encouraged the students to continue to work hard.

He said that despite cost constraints, the Government had ensured that "100 per cent of all of our young people have the opportunity of five-year secondary school exposure and more and more of young persons have the chance to go on to sixth form".

Noting that this is being done at a significant cost, he informed that providing high-school education for one student amounts to some $400,000 per year, and close to $650,000 per student per year at the sixth-form level.

"This is significant money ... . You are the beneficiaries, and I feel sure that you will continue to do very well in all the areas of academic or vocational studies for which you are preparing," he said.