MIRACLE BABY! - Little ‘Kesh’ lives to tell the tale after 15 surgeries in yearlong battle with cancer 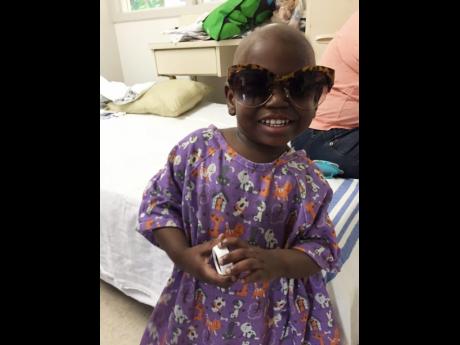 Contributed
Three-year-old cancer survivor Keshinae 'Kesh' McFarlane of Flankers in St James, who was discharged from the Jackson Memorial Hospital last Friday after doctors cured a rare type of liver cancer that she has battled for the last year. 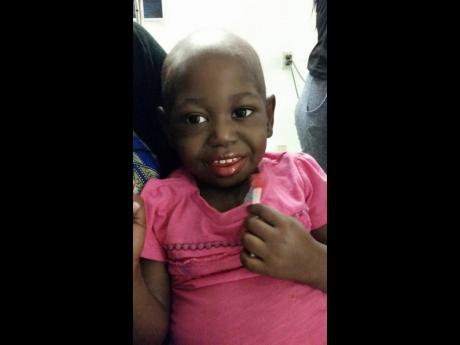 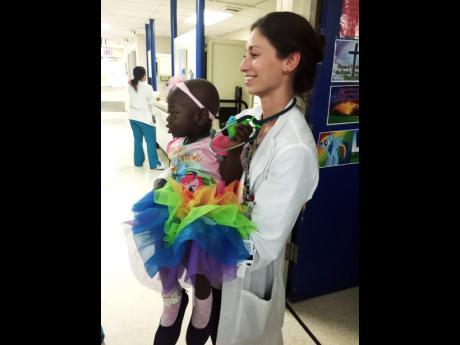 Wearing two large wings depicting an angel, the youngster was given a historic farewell party by doctors and nurses at Jackson, 14 months after she was diagnosed with stage-four hepatoblastoma liver cancer at the Cornwall Regional Hospital in Montego Bay.

When Kesh arrived at Jackson in October 2014 from Jamaica, she was described as skin and bones, with a large protruding abdomen.

"She went into a coma a few days later, and never woke up until January 2015. When she woke up it was unbelievable," exclaimed Kesh's mother, Nicole Brown, adding that her daughter, with the strength of an ox, shocked doctors by pulling out her breathing tube, showing an immeasurable determination to breathe on her own.

It's not as if the doctors had not given up on Kesh. They did during the first week of January, but after the family insisted on continuing the treatment, and the miracle child waking up on the 15th, they, too, fought hard to keep her alive.

"During the 10-hour resection-ing, they removed three quarters of her liver, but the liver regenerates itself. The cancer had also spread to her lungs," said 26-year-old Brown.

The treatment protocol for hepatoblastoma is shrinkage of the tumour and resectioning of the liver.

"When she arrived here, the tumours had displaced her vital internal organs, including her lungs. She had to be assisted by a ventilator to breathe," Brown told The Sunday Gleaner.

According to the mother, who had to quit her job at the Montego Free Zone, the doctors gave her family all the treatment options and the risks associated with Kesh's condition, but this only served to strengthen their resolve.

At the outset, Brown said her daughter received four rounds of aggressive chemotherapy, including an experimental drug.

"The tumour reduced from 80 centimetres in diameter to 60 centimetres, but due to the extensive damage to her liver, she desperately needed a liver transplantation in order to survive," she pointed out.

As important as the liver transplant was, the doctors could not proceed until the baby was cleared of any traces of cancer, Kesh's aunt, Michelle Leslie, told The Sunday Gleaner.

While in hospital, doctors had to perform a surgery to install a tube inside her ears to protect her hearing, owing to the side effects of some of the chemo drugs.

Leslie said if her niece had stayed in Jamaica, it is likely that she would have died.

"Owing to the fact this is a rare type [of cancer] in Jamaica, Kesh was admitted into the Cornwall Regional Hospital for approximately two months. While in the hospital, she was treated with Tylenol, which is for pain and fever.

"It was the doctors who advised us that they were unable to effectively treat her, instead recommending that we sought medical attention in the United States," said Leslie, who lives in the United States and was instrumental in starting a GoFundMe account, which raised US$1,500.

It is estimated that a year in hospital with a case as intensive as Kesh's cost millions of US dollars. Kesh has spent a year and will remain in America for an undetermined period for outpatient visits.

While in the US, she will be housed at the Ronald McDonald House.

One of the seven doctors who treated her, Dr Jamie Mazz, a paediatric resident, described the transformation as incredible.

"Hers was a tumultuous case. There were a lot of ups and downs. We would fix one area and something else would pop up," she said, adding that Kesh's resilience and joy for life were what kept her alive.

"She brings a smile to the faces of the doctors at the hospital. She would do surgery and bounce back in no time," said Mazz.

According to Leslie, when her family thought she was finished with chemo, the doctors found four places on her lungs where more chemo would be required to shrink the tumours.

Even when they thought it was the end, when hope was fading, when her lungs were squeezing together and it seemed there was no hope, the doctors at Jackson showed them a light at the end of the tunnel.

"God has given her strength beyond comprehension. I can't even fathom the words to describe her. This is a triumphant victory, seeing her being released cancer-free and she never needed to do a liver transplant because of the regeneration."

"I am overwhelmed with joy. This is a miracle. It has been a long fight, couldn't have done it without God. We have overcome the struggle, miracles after miracles. It was a painful and adventurous sojourn," she stated.

Baby Kesh has scars from bedsores and a story that her mom feels will give hope to many others.