Holness says he will not respond to Phillips over mansion 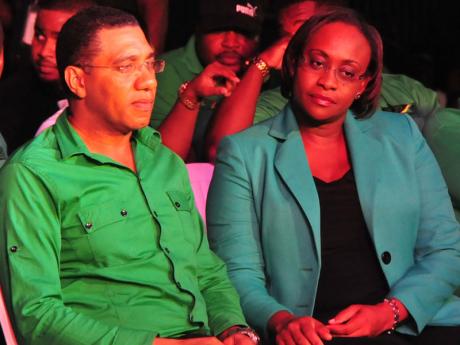 Paul Clarke
Jamaica Labour Party Leader Andrew Holness and his wife Juliet on the platform at a rally in Granville, St James.

Jamaica Labour Party Leader, Andrew Holness says he will not respond to criticisms by the People's National Party's Dr Peter Phillips about his mansion.

Holness was responding to comments made by Phillips in Portmore, St Catherine last week.

But in Granville, St James, Holness received cheers when he said he would not react. "We say up, because many are sitting down watching an incompetent government bringing the country down," said Holness.

"We say up, because for too long we have been down. It is time for prosperity. It is time for our economy to grow," he told the gathering.
adding that the JLP has had a track record of building Jamaica.

Quoting from recent polls, Holness also said the numbers clearly show that the JLP is better at governance.

He appealed to the undecided voters urging them to go out and vote on election day.