No 2015 poll - Portia opts not to call election this year 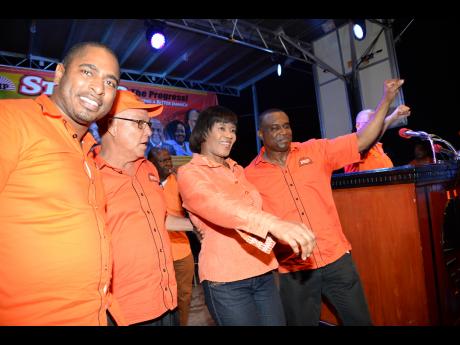 Jamaicans will definitely not be called upon to vote for a government before Christmas.

After being on the road for five weeks, People's National Party (PNP) President Portia Simpson Miller has called a sudden halt to the party's election push.

Addressing a campaign meeting in Black River, St Elizabeth, last night, Simpson Miller said Jamaica would not go to the polls on the current voters' list.

"We intend to do the reaping at the right time in the New Year. We have to continue to remind the people of our achievements."

She said that the decision to wait until the next voters' list is published on November 30 is a result of the soundings being done across the island.

Some 37,000 new voters will be added to the voters' list when a new one is published at month's end.

The PNP president pulled the party off the road, saying that Christmas is a special and sacred time.

She said the party would win the election when it is called, at the right time, because the PNP had been working in the interest of Jamaicans.

In the meantime, Simpson Miller said the PNP had a serious message.

"There is no time to waste. The hour is at hand. We must have oil in our lamps and unity in our camp. These meetings have been successful."

The next general election is due by December 29 next year, five years after the polls were last held, but the Government has been signalling it could call an early election.

Dr Peter Phillips, the PNPs campaign director, has suggested that it is more prudent to call the general election sooner than later, even as he emphasised that it is the prerogative of Simpson Miller to do so.

If Simpson Miller is to go to the polls this year, without interfering with the 12 days of Christmas, her last available date might be Wednesday, December 16.

In order to have an election on that date, the election would have to be announced by the latest Wednesday, November 25.

The Representation of the People Act, which provides the guidelines for the calling of an election, mandates that Nomination Day shall be at least five days after the announcement of an election.

The law also provides for Election Day to be at least 16 days, or not more than 23 days, after nomination day.

PNP General Secretary Paul Burke has said that the party will not be holding an election in the Christmas period, which effectively means no election before January.