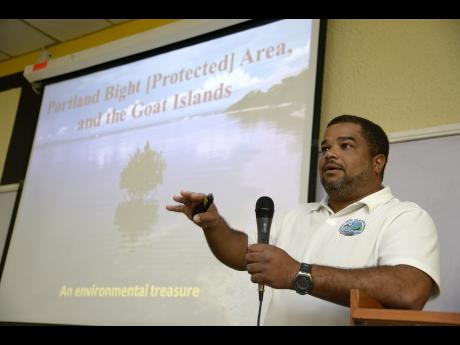 File
Brandon Hay is seen in this file photo, making his presentation at the public lecture titled "Goat Islands: The Potential Effects of their Development".

At least one marine expert has ranked Jamaica among the worst in the Caribbean when it comes to depletion of marine resources.

Brandon Hay, science officer at the Caribbean Coastal Area Management Foundation (CCAM), in an interview with The Gleaner, indicated the poor state of coral reefs in the country has also resulted in the marine sector resorting to coral gardening, a practice that has been employed with caution, but has become necessary as a strategy to protect the deteriorating sector.

"Among Caribbean territories, we are probably up there with Haiti in terms of depletion of our fisheries and its deteriorating fish lives. We are among the worst in the Caribbean," he said.

"There was a study on coral reefs, specifically on the Portland Bight area, which indicated that the percentage of live coral was not too low. We were in the same range of other places in the Caribbean. What we are far below on is our fish life, in particular, the herbivores. They were few and small, and they were not capable of doing their job in the ecosystem, which is to control the algae," Hay told The Gleaner.

He added, "Even here in Jamaica, we are restoring corals because the rate at which it naturally replenishes itself is so slow that we have to literally go in and propagate. It's called coral gardening. It's done all over the world, but corals are very delicate, and so we have to proceed with caution."

Hay also indicated that the impact of climate change is compounded by human errors that have been made over the years.

"We can expect every little shock at our reefs is going to result in mass mortality. This year, we have seen increases in sea-surface temperatures, and the expectation is that there could be another mass bleaching event in the Caribbean. The reefs are stressed." The science officer said.

Coral bleaching is the result of environmental or human activities which weaken the chorals.

"For the most part, the impact of climate change in the marine environment has been reduced in many other Caribbean countries compared to Jamaica, because they don't have those other compounding factors such as over fishing and chemical pollution that we have to contend with here," he continued.

He noted that quick and urgent action must be taken to remedy the situation.

"We are going to continue to lose corals and, unless we can rein in the effects, it's going to accelerate. Quite a lot of countries have been able to get their act together. In the marine space, things are even more precarious," he said.

"The critical thing is that once mass bleaching occurs, oftentimes, many corals don't recover, so you have mass mortality, and once the reefs die, the habitat that the fish depend on is going to start crumbling. Not to mention the effects it's going to have on the coastline. The coral is the basis for the marine sector," he said.

"The fact is that the habitat and its ability to produce is crumbling everyday, and that is directly linked to climate change."