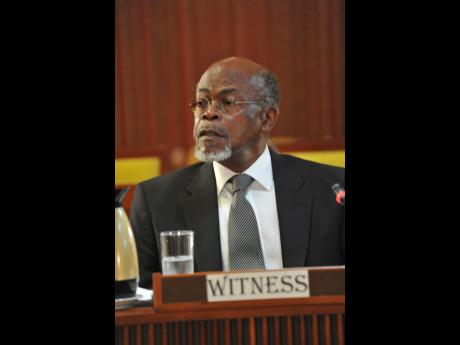 "And our country would have been spared this great disaster in which so many people lost their lives," Witter testified yesterday in his second day on the witness stand at the West Kingston Commission of Enquiry.

His assertion came in response to a question from Sir David Simmons, chairman of the three-member tribunal, on whether the delay by the Bruce Golding administration to green-light Coke's extradition to the United States gave the drug kingpin and his cronies the opportunity to "fortify" Tivoli Gardens, as was done before the start of the operations.

The commission has heard testimony that former justice minister, Dorothy Lightbourne, was given the authority to proceed with the extradition nearly nine months after the request had been received from US authorities. Golding, who has already testified before the tribunal, explained that the delay was due to constitutional and other legal concerns within his administration about the way the request had been made.

"Do you believe that hiatus provided an opportunity for Coke and his adherents to fortify Tivoli as it was eventually fortified for the 24th of May?" Simmons questioned.

"Mr Chairman, I think that is self-evident. If the Government's handling of the extradition requisition had not been so protracted, undoubtedly, I feel, the events of May 2010 would not have taken place," the former public defender responded.

"I make no comments on the merits, or otherwise, of the legal steps taken by the Government, but it is plain enough that had there not been all that, the events of May 2010 should never have taken place." he insisted.

During a sometimes testy cross-examination from attorney for the Jamaica Constabulary Force Deborah Martin, Witter again described the operation as a "siege".

It came after he denied that he was the first person to use the word 'incursion' to describe the operation, which was aimed at capturing Coke.

"That's a media invention. My word is siege," he said, triggering an exchange with Martin.

"You think siege is a more appropriate word?" Martin shot back.

"Yes, and I said so. And I change not one drop or tittle of it," he replied.

"You consider the action of the State in going into Tivoli because of circumstances that justified a state of emergency to be action consistent with a siege?" Martin pressed.

"No, that would be the beginning of it. Because of what I myself and my investigators saw and heard, and that, put together with what had been reported to us, there was no mere incursion," the former public defender insisted.

Witter testified that it did not surprise him to know that members of the security forces encountered resistance in the west Kingston community but reiterated that one of the things that the commission should focus on was the level of resistance with which they were met with.