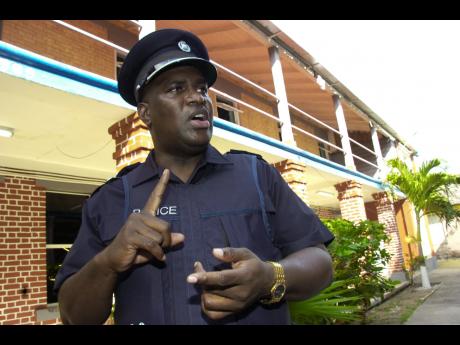 For the second time in just over five months, there has been a major jailbreak in

In the latest incident, which took place at the lock-up at the Freeport Police Station, in Montego Bay, at an unspecified time before daybreak, six men, including one who was only recently convicted of a double murder, tunnelled their way out of their cell and made good their escape over the station's perimeter fencing.

"It is never the best thing to see (this) happen as a divisional commander, where you work hard to take the people who are wanted for crimes committed in your division or elsewhere (off the streets) only to have them break out of custody due to our (police) negligence," said Senior Superintendent of Police (SSP) Steve McGregor, the commanding officer for St James.

At a hastily called press conference yesterday morning, McGregor said a manhunt has been launched for the men, whose names, faces and features have been released to the public. The senior cop also stated that, immediately after the police became aware of the escape, the high commands of the neighbouring parishes were alerted and mobilised to look out for escapees.

"We will be going at them (escapees) with all that we have at our disposal," McGregor told the media, noting that dragnets were in place around the borders of St James.

- Shaniel Luton was recently convicted of a double murder. He is known to frequent Shaw Castle, Maroon Town, Farm Heights and Mt Salem, in St James.

- Benjamin Stephenson, also known as Ben, is facing a murder charge. He is known to frequent Lucea, Dias, Middlesex and Kingsvale, in Hanover; John's Hall in St James: and Grange Hill in Westmoreland.

- Randy Murray, 29, was arrested and charged with illegal possession of firearm. He is known to frequent Phase 6 at the Llandilo Housing Scheme; Darliston, Savanna-la-Mar and Petersfield in Westmoreland; and Anchovy, Mt Carey and Montego Bay, in St James.

- Marcus Robinson, 34 years old, was charged with illegal possession of a firearm. He is known to frequent Richmond Hill, Montego Bay, Dome Street and Barnett Street, in St James.

- Gregory Roberts, 30, was charged with illegal possession of firearm and robbery with aggravation. He is known to frequent Thompson Street and Maroon Town in St James.

In a jailbreak at the lock-up in Savanna-la-Mar back in June, eight men facing charges ranging from murder to robbery, dug their way out of their cell and made good their escape, One was subsequently killed in a confrontation with the police while another was recaptured in Kingston.

While not blaming anyone specifically for yesterday's jailbreak, McGregor intimated that police personnel could find themselves in trouble based on his own assessment that negligence was involved.

McGregor used the press conference to urge family members and friends of the escapees not to harbour them or assist them in any way, as by doing so, they could be putting themselves at risk.

Yesterday's incident marked the second time in recent memory that the security at the Freeport lock-up has been breached, resulting in a dangerous prisoner escaping custody.

On January 30, 2013, Greg Taylor, who was behind bars for a series of serious offences committed in Hanover, St James and Trelawny, escaped under mysterious circumstances. Several police personnel were subsequently charged in connection with his escape.

Taylor was subsequently recaptured at the Glendevon home of a policewoman. He was reportedly found hiding under a table clad in a bathrobe and bed slippers.