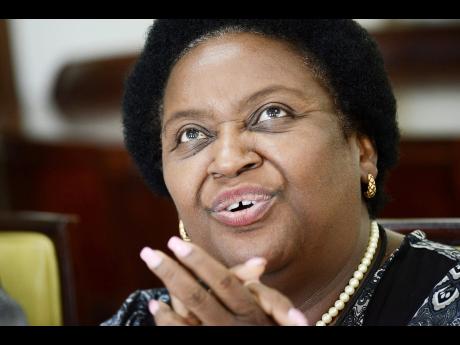 NEWLY APPOINTED Political Ombudsman Donna Parchment Brown has sent a strong message to members of parliament and caretakers islandwide, as she moves swiftly to stem any further violent flare-ups in Newlands, Portmore, St Catherine, in what appears to be a resurgence of political violence, with the killing of two persons Tuesday night.

The installation of green and orange flags by supporters of the People's National Party (PNP) and the Jamaica Labour Party (JLP) are said to be linked to the killings.

Yesterday, Parchment Brown met with the general secretaries of both parties in an effort to cool tensions in the East Central St Catherine constituency.

"There seems to be a strong amount of confidence in the idea that these are politically connected deaths," Parchment Brown told The Gleaner yesterday.

A resident of Newlands, Sandy Forbes, was killed by gunmen who drove up beside her and opened fire while she was walking on the Newlands road on Tuesday night. She had earlier objected to the erection of party flags in the community. A man was subsequently stabbed to death in what some people in the community believe to be a reprisal killing.

The Gleaner understands that more than 20 persons have been detained in a joint police-military operation in relation to the killings.

While indicating that the police would have to decide whether the killings are linked to politics, Parchment Brown said whether or not this is so, "the public feels that is the reason, and that will affect how the public behaves".

With an unenviable record of political violence, particularly in the 1980 general election, where more than 800 people were killed in politically linked violence, the political ombudsman warned politicians that Jamaicans would no longer tolerate acts of political tribalism.

"I want to say right now that Jamaica will not tolerate aspirants for political power directly - or through their representatives - causing harm to us. I condemn in the [strongest] of terms all persons who are connected with this, and they can expect both to feel the full force of the law from the Jamaica Constabulary Force when they have completed their work. But in addition, the candidates will need to ensure that there are no further acts anywhere in the island of Jamaica, whether directed by them to benefit them or in relation to which their names are connected," Parchment Brown declared.

The political ombudsman told The Gleaner that last week she spoke with Horace Chang and Paul Burke, the JLP and PNP general secretaries, respectively, about the urgent need to remove political flags and cease the painting of light posts with party colours.

She said the flags should have been removed over the weekend and a status report submitted to her on the matter.

"I had initially requested a meeting with them for the purpose of coming up with an urgent plan for the removal of all [flags] and prevention of the posting of any more political material. This intimidates, this antagonises, this provokes," she charged.

She noted that the agreement on the Political Code of Conduct prohibits any action that would tend to provoke or that defaces private or public buildings with a view to sending a political message.

On the question of pronounce-ments on the campaign trail, Parchment Brown said there have been utterances on political platforms that have been unbecoming of the candidates and not beneficial to their objectives.

She argued that utterances on platforms that are intended to denigrate or diminish others do not result in a safer, more acceptable political climate.

"I want to call on every person who represents a political party, who supports a political party, who is a candidate or aspirant, who is a funder of a political party or if you are the leadership or institution itself, the code that was signed is a serious commitment. The laws that have been passed govern all of us, and I am calling on them to step back, take a deep breath, rethink their strategies and, therefore, make sure that what they say or do does not cause me or the police to have to act."