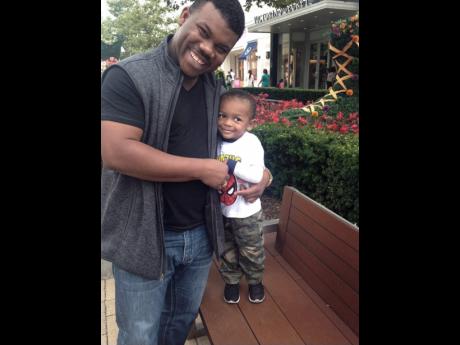 WHEN 31-YEAR-old Jermaine Damien Edwards, a talented singer, graphic artist, and "anointed man of God" left the United States on October 29 this year to visit Jamaica to collect his green card at the United States Embassy in Liguanea, he didn't have a good feeling about the trip, and he told his mother, Jean Pennant, about his fears.

"He said to me: 'Mommy, I don't feel good about this trip,' and I said to him: 'Son you have to go because I don't want you to overstay your time (on your visa in the US)'."

"I dropped him off at the airport. I even said to him: 'Don't take many things because you are not going down there to stay long, just take the bare minimal things you need'."

Pennant said that her son told two of her female friends who lived at Southern Park Parade, Portsmouth, in Portmore, St Catherine, where he was staying, that he was doing something on his computer for someone. On the morning he was last seen, he left home at about 7 a.m. and told the women that he would return home by 10 a.m. When he left the house, Edwards was wearing jeans and an Old Navy khaki T-shirt with stripes.

"Usually, he would say where he was going, but that morning, he said: 'I am going to meet someone, and by 10 o'clock, I will be back'," Pennant said her son told the women with whom he stayed.

On November 26, Pennant called her son's cellular number and found it a bit strange that he did not respond. Subsequent calls to Edwards failed to make contact, which set off alarm bells.

However, Pennant, who described herself as a devoted Christian and ardent prayer warrior, has been fasting and praying since November 27 and is still extending her faith with the hope that her son will call her soon.

Refusing to accept a negative outcome, the concerned mother has moved to mobilise more than 15 churches to join forces in prayer for Edwards to return home.

"I believe God, and I have not relented on my prayer," Pennant said, noting that before he went missing, she spoke with him daily. "He is not the type to leave home and nobody knows where he is.

"I believe in the Word of God; I believe that the word cannot fail me," Pennant confessed of her undying faith in God.

"My son is a very helpful person. He will know that you are starting a business or your business is struggling and you call him, and he will say: 'Let me see if I can do some (business) cards for you', and he won't even charge you."

"Send him home," Pennant yesterday appealed to those persons who may have her son in their custody.

Edwards is of dark complexion, stout build, and about 164 centimetres (5ft 4in) tall. The police have reported that he left for an undisclosed location and has not been seen since.

Does not play around

Edwards was a junior soloist in the Jamaica Cultural Development Commission's song competition while attending the Edwin Allen Comprehensive High School. He won gold, silver, and bronze medals. "He is a very talented singer and an anointed man of God. He does not play around."

Earlier this year, The Gleaner reported that at least one person is reported missing every three hours in Jamaica. The police have recorded eight missing persons' reports per day for a total of 9,715 between January 2012 and April 2015.

On November 14 this year, fire destroyed the dwelling place of a family of four in Lime Hall, St Ann, and the police reported that no remains were found inside the house. To date, members of the family are still missing.

However, the police National Intelligence Bureau has said that almost 90 per cent of the people reported missing over the January 2012-April 2015 period returned home.