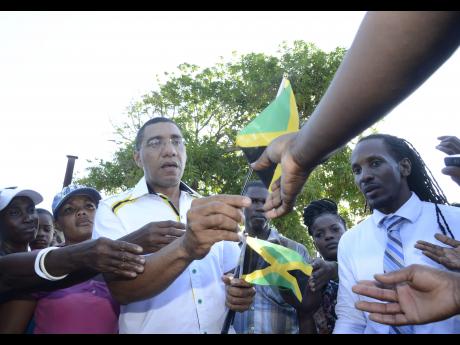 Jamaica Labour Party (JLP) Leader Andrew Holness has renewed his 2011 call on Prime Minister Portia Simpson Miller to walk with him in a symbolic gesture of peace.

"In 2011, I made a call to Mrs Simpson Miller when she was leader of the Opposition, and asked her to join me in a walk through communities that may still have some potential for political violence, to show that both parties and the leaders are at one against political violence," said Holness.

In his address to residents of Newlands in East Central St Catherine, two days after two people were killed in what some residents have claimed was sparked by politics, Holness said: "I think it is time to renew that call."

While the police are yet to determine a motive for the killings, some in the volatile community are claiming that the incidents could have been sparked by the erecting of party flags.

At the same time, some residents complained to The Gleaner that the police, while not abusive, were anything but engaging in the execution of their duties in the strained community.

"The police need to have a closer working relationship with the people," said a food vendor, who stopped The Gleaner to air his grouse.

He earlier complained to Holness that the police had locked down the community in the aftermath of the killings, handicapping business activities.

"They are here to serve and protect, but when you just drive around and don't interface with the people, how you think the people are going to work with you?" he added.

Holness distributed scores of Jamaican flags to the residents saying, "If you are going to give out any flags, my view is that everybody - Labourites or Comrades, PNP or JLP, no view or many views - can all unite around the Jamaican flag and respect it."

Holness told the residents, who waited patiently on his arrival, that the erecting of political flags is a thing of the past. "Its petty and it doesn't win any votes," he said.