Executive of Moon Palace Resort promises another US$300 M investment 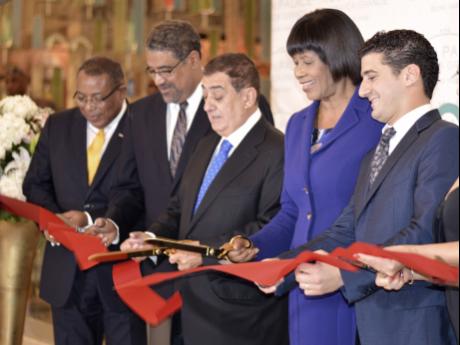 JAMAICA'S PRIME minister, Portia Simpson Miller, says that under her administration, more than $64 billion has been invested in the tourism sector by industry stakeholders.

Moon Palace Jamaica Grande is valued at US$200 million. The resort was officially unveiled to the public on Wednesday.

"My administration has created the kind of environment where foreign investors have been looking at Jamaica as a great place to do business, and this Moon Palace investment is a testament to that fact," Simpson Miller told industry stakeholders.

She pointed out that tourism represented an area of real economic stability, and was the country's main engine of growth.

"It employs more than 180,000 persons and contributes more than US$2 billion in earnings annually. This commitment by Moon Palace goes to show that tourism continues to be on the rise and that Jamaica continues to attract direct foreign investment."

Moon Palace Jamaica Grande has employed 1,200 workers. More than 50 per cent of them are former employees of the Sunset Jamaica Grande, a retention that had the prime minister lauding the Mexican-owned organisation.

"This is a company with a heart that has not only invested in Jamaica, but invested in the people of Jamaica," Simpson Miller stated, lauding the Mexican-owned group.

If the new investors have their way, the Jamaican Government could still be boasting years to come as Moon Palace's executive vice-president, Gibran Chapur, indicated that his organisation would be willing to spend an additional US$300 million investing in the hotel sector.

"We want to be a part of this country's continued success," he stated, making reference to an earlier meeting with the prime minister.

"As I mentioned earlier to the prime minister over lunch, we have already invested more than US$200 million. Why not invest a further US$300 million?"

Chapur described Ocho Rios as one of Jamaica's fastest-growing resort towns, which vacationers are keen to visit.

"Ocho Rios is on its way to becoming the ultimate destination for guests from all over the world," he noted.

Moon Palace offers a five-star experience. The hotel, the former Sunset Jamaica Grande, has gone through extensive refurbishing. The rooms have been modernised, meeting spaces were overhauled, and the common areas upgraded and redesigned.

The child-friendly resort has 730 rooms.