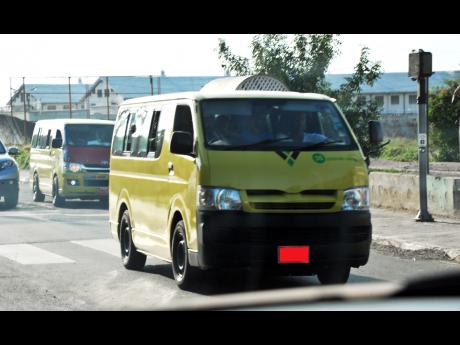 One of the types of minibuses in which students were recently seen ‘lapping-up’.

Despite repeated threats from the Transport Authority and the police, the age-old problem of unruly students, bawdy behaviour, and vulgar displays on public passenger buses in the Corporate Area persist.

Drivers and loader men continue to cram bodies into every available space. Schoolgirls continue to find seats on the laps of schoolboys ('lapped up'), and the most lewd dance hall songs are the favourites, blasting uninterrupted from the speakers .

Last Tuesday, 46-year-old Ann-Marie Marverly was left incensed after boarding a minibus on Spanish Town Road in Kingston only to find herself squeezed between schoolchildren lapped up and gyrating to lewd music.

It was just after 8 o'clock in the morning, and Ann-Marie, who lives off Spanish Town Road, took the minibus heading to a nearby community, where she dropped off a parcel while staying on the bus, which was taking her to downtown Kingston.

This was a cost-cutting decision for Ann-Marie as with one bus fare, she would achieve her mission, but in the end, she declared that it was not worth it as she reached downtown crushed and disappointed by her experience.

"I think it was disgusting. The music slack and dirty; talking all kinds of things. Worse, the lapping up. I never expected that, and as a mother, I can't condone that because I wouldn't want my daughter to be sitting in nobody's lap in any bus," said the woman as she straightened her crushed clothes as the last of more than 20 students filed out of the minibus at the bus park in downtown Kingston.

"It is morning, and listen the music that they are listening," she said, the sound from the speakers growing loudest upon the opening of the bus door. "If it was some gospel music it wouldn't be so bad, but them singing the dirty music and is school they are heading to," added the woman who indicated that she was a Christian.

Ann-Marie was among only five adult passengers in the bus, which zigzagged its way through traffic with close to 30 passengers, although it was licensed to carry 18.

The adults all sat on the second-to-last seat in the bus, and their discomfort was clear from the way they gripped unto the seats before them, remaining stoic as uniformed students sang the lewd tunes unreservedly.

At the front of the vehicle, three schoolgirls were cooped up beside the driver on the front seat.

"A suh dah bus yah run, me general," said the conductor, who was clad in a pair of black jeans, grey overalls, and sneakers, a stainless steel chain weighing heavy around his neck. He spoke gleefully as the bus slowed to admit another schoolgirl running eagerly towards it on Spanish Town Road.

The young girl boarded the bus and forced herself between two adults to stand on the bus step.

The conductor also stood on the step, his body hanging out the open door while he used his pelvis to brace the schoolgirl. His sluggishness in putting the girl in the bus angered the driver, who sped off as fast as he had stopped.

This is not a new problem for the police, and Senior Superintendent Calvin Allen, head of the Police Traffic Division, says they have been working with the Transport Authority to arrest the problem.

"It is immoral, and left unchecked, can lead to other things. A public passenger vehicle is to transport public passengers, and it must be done with that level of standard and ethics and cleanliness. So these are not activities that we are going to be leaving without taking some action when these matters come to our attention," said Allen.

"It goes to show the enormity of the challenges that the police have to deal with. We have been taking action, and we are going to continue those efforts," added Allen as he vowed to take action to clean up the subfranchise bus system.

The Jamaica Urban Transit Company (JUTC), which owns the franchise to operate buses in the Kingston Metropolitan Region, is also struggling to deal with these lawless operators.

"The overcrowding thing in these small buses is not something that we encourage. We expect that the drivers and the conductors are going to follow the rules set by the Transport Authority in terms of the capacity, the uniform, the giving of the tickets, and so on," said Clinton Clarke, communications manager at the JUTC.

He said the capacity of the buses varied, and the number of passengers they are licensed to carry must be displayed.

According to Clarke, the JUTC has a Franchise Protection Unit that checks on private operators at intervals to ensure their compliance. He indicated that the unit did not have the resources or manpower to ensure that all franchise operators stayed in line.