Help on the way for fire victims 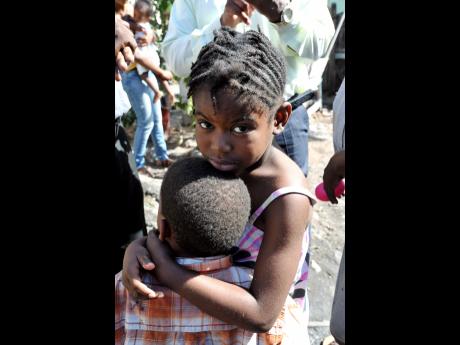 Norman Grindley
Cassie Martin comforts her cousin, Ackeem Green, as they struggle to cope with the aftermath of the fire that destroyed homes housing 26 families at a lot between Church Street and Mark Lane in downtown Kingston on Saturday. 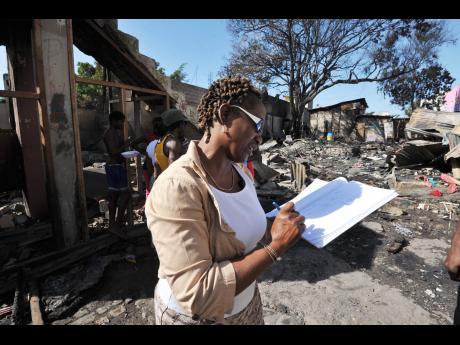 Norman Grindley
Roxann Harris of the Ministry of Labour and Social Security ensures she has all 26 families listed to receive both fire reports and welfare packages after Saturday’s blaze.
1
2

Help is on the way for the 26 families who were burnt out from premises at 50 Church Street on Saturday.

Representatives of the Ministry of Labour and Social Security and the Child Development Agency (CDA), along with Member of Parliament for West Kingston Desmond McKenzie, brought words of comfort and promises of assistance to the weary families yesterday.

Roxann Harris, from the ministry, said victims would receive packages.

"So it will be comfort items, including mattress, probably a bed if they have the base, and food items," she said.

She cautioned, though, that there was no definitive timeline for assistance.

"It's based on availability of funds, but in cases like this, as it is an emergency, the Government will make all the speedy effort they can to assist them in the soonest time possible."

Residents say 40 children have been affected by the fire.

Some were able to return to school on Monday, as school administrators encouraged parents to send them, even without uniforms and books, as they have end-of-term examinations to sit.

The CDA representatives were present to arrange counselling for the children, starting today.

"It can be traumatic for them (children) because a lot of them have problems sleeping; they have problems functioning at school," she said. "So that is why we see it as very important to offer counselling for them, for them to understand the whole concept of grief and loss."

She pleaded with the public to help, especially in light of the season of giving.

"So, just to see if, even in terms of your Christmas shopping, just to cut the budget a little bit, just to help these families get back on their feet," she said.

Residents said while the children have been staying with relatives and friends, they have been using tarpaulin to cover their heads at night since the fire.

"We have to work with it so, because we nuh have no clothes," said Jacqueline McNab, who said she has been living there for more than 20 years.

"We just a go roun' and beg people help ... even a pound of rice or so. We have life though, enuh, so wi haffi give God thanks fi that."

There are rumours they will not be allowed to rebuild on the same lot, but the residents say they have nowhere to go.

"We a poor people, we nuh really have it," said Vanessa Watson. "So it woulda better if we coulda rebuild. Is a whole heap a pickney live in here. Weh people a go go wid so much pickney?"

McKenzie opined that this fire mirrored one in Denham Town about a month ago, but was even worse.

"This one is going to be a major problem ... based on the location of the fire. It is going to be a challenge, first of all, to identify the owners of the place and to seek their permission to try and put back some form of housing," he said.

McKenzie lauded the agencies that have visited the residents so far, and said a private-sector company had also made an approach to assist.

But he reiterated a perennial issue in the constituency.

"One of the problems of West Kingston is that the housing stock is very old," he said. "We have not been able to upgrade or to tear down or to build new housing solutions. That has contributed significantly to the amount of fires that we have had."