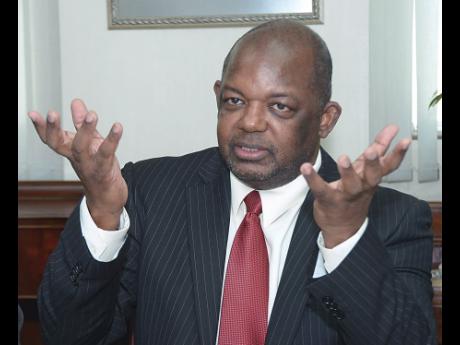 HEAD OF the Office of Utilities Regulation (OUR) Albert Gordon is warning that Jamaica is facing a major water crisis, and this is not because of the almost inevitable drought that will come next year.

"There is a crisis in that the infrastructure that exists now is in serious need of upgrade and expansion, and if you want to prevent similar situations, such as the problems with the drought which will come because of the changing weather conditions, there has to be action," Gordon told The Gleaner on the fringe of a media luncheon yesterday.

"The system is very vulnerable, and it needs to be updated," added Gordon.

He said the system used to treat waste water across the island is in no better condition and a crisis also looms in that area.

"There are still at least 16 towns that need central treatment systems and the network in Kingston covers only 30 per cent of the population. The on-site systems in Kingston, most of them are failing now, and that is contaminating the groundwater.

"So when you put everything together, the entire system needs major investment upgrade, overall, for it to satisfy and meet the requirements going forward," said Gordon.

The OUR boss argued that contrary to the belief in some quarters, the water crisis is not confined to parishes in the eastern end of the island as persons in several other parishes are facing major woes.

"Unfortunately, a lot of people in these rural communities have grown accustomed to getting water once a week, or once every two weeks, so they have accepted the situation," said Gordon.

He said the OUR will be working with the Inter-American Development Bank (IDB) to stage a major conference early next year to highlight the problem and look at solutions.

"The aim of that conference is to look at the major issues affecting the sector, chart a path forward and, hopefully, get the multilaterals involved to secure financing for the projects that will be necessary to take the sector forward, so that it can sustainably support the development of the other sectors in the country," said Gordon. He also argued that the society needed to understand the urgency of the problem.

Gordon rubbished claims that the resources are not available to finance the work needed to avert the crisis and that the capacity to do the work is not available.

He said the multilaterals, including the IDB, have been willing to finance the projects with loans which could come in at a one per cent interest rate, with a five-year moratorium and 20 years to repay.

That issue was put on the front burner in March with Opposition Spokesman on Finance Audley Shaw expressing concern over the long delays in the implementation of a critical IDB-funded project aimed at significantly reducing the amount of water being lost by the National Water Commission (NWC).

Shaw charged that nearly four years had elapsed and the project was still languishing, adding that the IDB had informed him that the money was not being taken up on an aggressive basis.

At that time, Minister of Water, Land, Environment and Climate Change Robert Pickersgill admitted that the IDB had earmarked US$42 million for the restoration of leaking infrastructure in the NWC's system.

He said he had forwarded a plausible explanation to the IDB as to why the project had been delayed.

"We can't fool around with US$42 million, and (from) the proposals that came, it boils down to two big companies, and there was an aspect of it that was a bitter pill for me to swallow so, in terms of the procurement, it has taken some time ... the requests for proposals were scandalously high," declared Pickersgill at the time.

But for Gordon, who once headed the NWC, there is no more time to lose.

"At this point, I don't think we have a choice, so where there is a lack of capacity, we have to put capacity in place. The financing is available and, when you implement most of these projects, the NWC and the sector will become more efficient and this does not have to translate into higher rates," said Gordon.

He charged that there would be no significant economic growth until the water crisis is fixed.

"There are some major projects which have been in the pipeline for some time, such as those intended to reduce losses ... ; those are ongoing and will have some impact, but there is still a whole lot more to be done," added Gordon.

Smooth sailing for more renewables - OUR