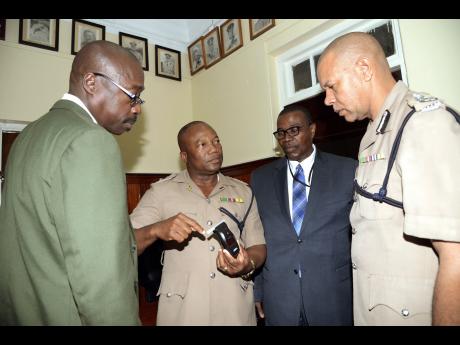 Norman Grindley
Senior Superintendent of Police (SSP) Calvin Allen (second left), head of the Traffic Division, has the attention of Deputy Commissioner Clifford Blake (right), SSP Clinton Laing (left) and Assistant Commissioner Devon Watkis, head of the Counter-Terrorism and Organised Crime Investigation Branch, during a press conference at the Office of the Commissioner of Police in St Andrew yesterday.

With fraudsters making off with more than J$500 million each over the past two years, the police are warning citizens and business operators to be wary of tricksters this Christmas season.

Assistant Commissioner of Police Devon Watkis, head of the Jamaica Constabulary Force's (JCF) Counter-Terrorism and Organised Crime division, revealed yesterday that investigators have seen a spike in fraudulent schemes that run the gamut.

They range from unauthorised access to financial accounts and the creation and use of fraudulent credit and debit cards to schemes in which criminals present themselves as employees of the various utility companies to gain access to premises or as suppliers of goods and services to unsuspecting persons.

Since January last year, Watkis said the police have investigated 120 reports of fraud involving use of the Internet, which resulted in losses totalling J$450 million. For the same period, he said US$486,000 (approximately J$58 million) was lost in similar schemes.

For non-Internet-related fraud, the police revealed that more than 100 reports were investigated up to the end of November this year, with losses totalling J$376 million and US$1.2 million.

Yesterday, police investigators revealed that four men were visiting homes in the Corporate Area and identifying themselves as employees of the National Water Commission or the Jamaica the Jamaica Public Service Company.

To gain entry to the homes, investigators say the men claim to be installing shower caps to help save water or energy-saving bulbs as part of a government programme before brandishing firearms and robbing their unsuspecting victims.

"Be wary of persons who, during this period, are offering some products or services that are too good to be true," Watkis warned during a press conference at the JCF's St Andrew headquarters.

"These persons are very convincing in what they say, who they target, and how they sell the stories. They will make everything convenient for the victims ... . They are generally persistent [and] overly friendly," he cautioned.

According to Watkis, fraudsters have also targeted business operators by offering a range of products and services.

"We are seeing cases where persons are placing orders, delivering the payment, and persons are not coming forward to deliver the goods," he said.

In addition, he said the police Fraud Squad has seen cases in which persons order large quantities of goods and make payment with cheques that turn out to be fraudulent.

"Therefore, businesses must conduct their due diligence before allowing persons to access and take away [their] goods," he cautioned.

The warning by Watkis came as the Police High Command announced a number of measures to keep Jamaicans safe for the holiday season.

Chief among the measures is the deployment of 700 additional police personnel across the island for the period.

Deputy Commissioner of Police Clifford Blake, who heads the JCF operations portfolio, said personnel would be taken from desk duties and police training and tasked with carrying out public-safety duties, such as crime prevention, along with traffic and vending control.

"It comes down to an issue of prioritising. What are our priorities at this time of the year? Public safety, public reassurance, [and] crime reduction are our priorities. That's why we have to draw on these persons," Blake said.

With 342 persons killed on the nation's roadways so far this year, head of the JCF Traffic Division Senior Superintendent Calvin Allen appealed to motorists to conduct themselves with the "highest level of consciousness, responsibility and awareness".

While indicating that the police are not trying to spoil the holidays for anyone, Allen revealed that 200 portable breathalyzer machines have been distributed to police personnel across the island to nab persons who insist on drinking and driving.

He said drivers found to be above the legal limit of 35 micrograms for every 1,000 millilitres of breath will be taken into custody and subjected to another test that will determine whether they are prosecuted.

"This is not to scare anyone. We really want for you to have fun and enjoy the festivities with your family and friends, but we want for you to remain conscious as you utilise our roadways from the perspective of safety," Allen pleaded.