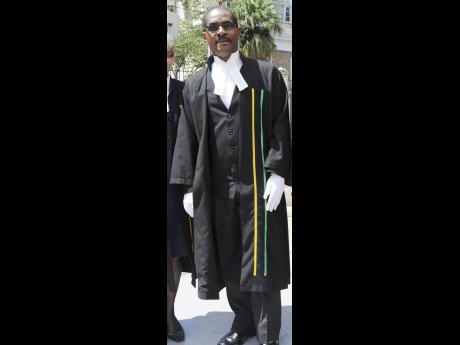 Outgoing president of the Court of Appeal, Justice Seymour Panton, last Friday continued to bat for the Caribbean Court of Justice (CCJ) to become the nation's final court and questioned parliamentarians opposed to the move.

Panton charged that opposition to the court is being voiced only because these persons are being influenced to do so by their parliamentary predecessors.

"I can comment but will not go far in commenting on it, but I noticed that the debate on the CCJ has come to an end and there is no resolution. My only question is, why is there a debate? Many of the persons who are now opposing the CCJ, they were in the vanguard, decades ago, for its establishment," declared Panton as he addressed a luncheon staged in his honour by the Cornwall Bar Association last Friday at the Grand Palladium hotel in Lucea, Hanover.

"And I can only say the reason why they are now doing that is because they believe that the majority of Jamaicans do not read, and have no sense of the issue. And some of those who are opposing our participation at the high level of the CCJ, I think - I may be wrong - that they are under instructions from people who may have been in Parliament but are no longer there. Think about it," said Panton.

He said the reputation and performance of the Jamaican judiciary has been unassailable, and that the same could not be said of the other two branches of government, the Legislature and the Executive.

"When we became independent, when they were negotiating our independence - because we didn't fight for it, we negotiated in Jamaica - I am yet to understand why the judicial part of things was left in London.

"Because if you look at the past 50-odd years and compare the performance of the three branches of government, no independent-minded person would say that the judiciary has not lived up to what is expected. We can boast in the judiciary that we have not had any scandals. We had one incident in the 50-odd years where a resident magistrate did something rather stupid," said Panton.

"But I would like the historians to look at the other branches of government and the scandals that have been documented in respect of those other branches, and this would tell you ... I am very pleased with Barbados, Guyana, Belize and soon to be Dominica - how they have acceded to the Caribbean Court of Justice without any hassle. And then I consider what Jamaica is supposed to be and look at what we have been doing in Parliament with the CCJ," he added.