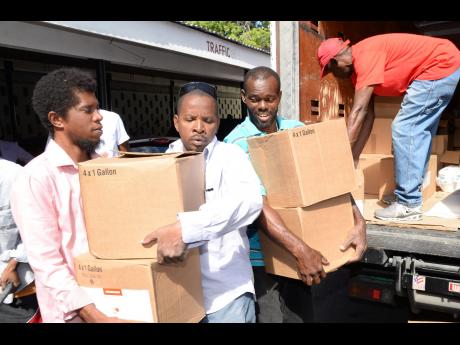 Jermaine Barnaby
Persons at the Marie Atkins shelter remove boxes of items from a Digicel truck that delivered Christmas donation for the homeless there yesterday. 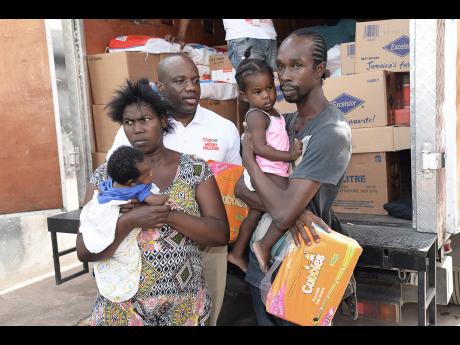 Jermaine Barnaby
Elon Parkinson (centre), Digicel public relations manager, hands out items to parents Charmaine Terrelonge and Leonard McKain and their young children, who lost belongings in their home during a fire along Mark Lane two weeks ago. The telecommunications giant came to make donations to families as a Christmas gift yesterday.
1
2

The McCain family was just one of many at Mark Lane, downtown Kingston, that was given a glimmer of hope, following a presentation that was made by telecommunications company Digicel yesterday.

Digicel donated several gifts to both the Marie Atkins Night Shelter and residents of Mark Lane in Kingston.

Scores of persons from Mark Lane were left homeless following a fire that razed a tenement dwelling recently.

Pointing to her eight-week-old baby, Lenard McCaine, Charmaine Terrelonge told The Gleaner that she was looking forward to greater days, though she was still worried.

"It's not easy. The situation has been very tough for the past couple weeks, but I have to give thanks to Digicel for helping us out. At least it's a start," she declared.

Sheldon Gentles, another resident, noted that though he was grateful, he was also desperately in need of a roof over his head.

"Well, I see a glimmer of hope. At least I know that people still care. From morning, is just a drink of water mi have. Mi very hungry, but mi just a gwaan fight it," he said.

Huge gaps to be filled

Over at the shelter, Mavis Farquharson, acting inspector of the poor, told The Gleaner that there were huge gaps to be filled and that she was thankful for the help.

"I can't stop smiling. It's all over my face because we needed the things. We have to keep the place clean, and the detergents we received come in very handy," she said.

"We have the mentally ill, deportees, and the homeless. We have people living here from as far back as Gilbert. People are here who are ostracised by their families, so the need is great because we cater to a wide cross section of persons," she continued.

Elon Parkinson, public relations manager at Digicel, said he was more than happy to give back to the community.

"Digicel has a tradition of helping people, but this is certainly one intervention we thought necessary for us to get involved in, particularly because we are members of the downtown family. When we heard that our brothers and sisters were burnt out, we had to come on-board," Parkinson said.

"At both locations (Marie Atkins and Mark Lane), the common denominator is that they are left without a roof over their heads. As a result, we are trying to make it as smooth as possible. We know many of them were left hopeless, and the Christmas season might not be as good as they expected it to be, but we are just trying to do our part to alleviate the pressure," he said.