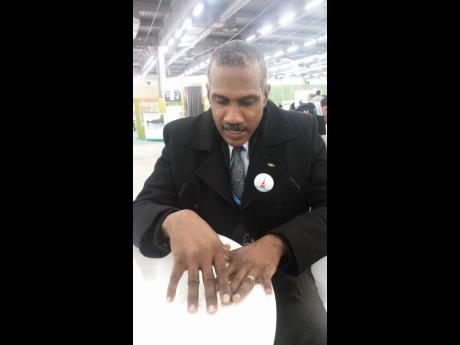 Petre Williams-Raynor
Khan ... I would say to the private sector, look at investing in renewable energy and energy efficiency.

The new global climate deal, reached after two weeks of intense negotiations, is a signal to the private sector, local and international, of the need to reassess current investment flows.

Jamaican negotiator Dr Orville Grey said the private sector will be critical, given the stated goal of the new deal of "holding the increase in the global average temperature to well below two degrees Celsius above pre-industrial levels and to pursue efforts to limit the temperature increase to 1.5 degrees Celsius above pre-industrial levels, recognising that this would significantly reduce the risks and impacts of climate change".

"The private sector will at some point have to take the lead because the technologies that are likely to take us to carbon neutrality will likely come from the private sector and not the public sector, at least as it relates to technology," Grey, coordinator for adaptation for the Alliance of Small Island States during the negotiations, told The Gleaner.

If the world is to meet the 'well-below-two' target, it will require a significant shift in the current high levels of consumption of fossil fuels, including coal and oil, towards renewables such as solar and wind.

Colonel Oral Khan, chief technical director in the Ministry of Water, Land, Environment, and Climate Change and himself a member of the Jamaica delegation to the talks, was in full agreement.

"The private sector is encouraged under this agreement to support the mobilisation of finance to support adaptation and mitigation," he said.

On Jamaica's private sector, Khan said: "The State has submitted its intended nationally determined contribution commitment to [reducing greenhouse gas emissions] to the UNFCCC (United Nations Framework Convention on Climate Change) Secretariat. Our commitment is consistent with the goal of our National Energy Policy. I would say to the private sector, look at investing in renewable energy and energy efficiency. In time, I hope that we will see more entities entering into public-private partnerships."

Neither Grey nor Khan is alone in their thinking; international leaders in business have echoed their sentiments.

"The business case for eliminating greenhouse gases by 2050 is irrefutable. Indeed, solving climate change presents the greatest economic and social development opportunity of our time," said Sir Richard Branson, founder of the Virgin Group, in a release to the media on Saturday.

"The new climate agreement is a historic turning point. Now business can and must innovate to lead the transition to a clean economy. Together, it is our duty as human beings, responsible citizens and business leaders to protect the environment. A transition to a clean and green economy will lift millions out of poverty, and ensure the planet's health for generations to come," he added.

Arianna Huffington, president and editor-in-chief of the Huffington Post, mirrored his comments.

"This is truly a turning point in human history. We now have the chance to advance the well-being of people everywhere, while creating millions of new jobs and ending our reliance on fossil fuels," she said in the same release.

"This will help us build a safer, more peaceful world for all. This is exactly what business needs in order to thrive in the long run," added Huffington.