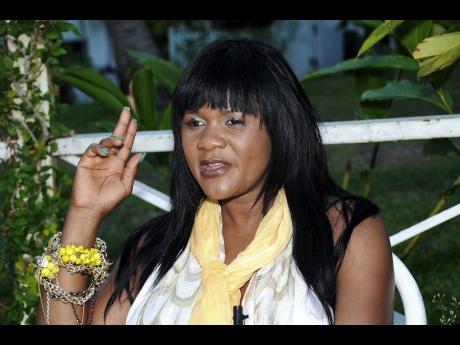 Dancehall icon Lady Saw yesterday declared that she cares "zero" about the potential earnings she stands to lose this holiday season because of her decision to become a servant of God.

The 43-year-old entertainer, whose given name is Marion Hall, confirmed yesterday that she was booked for several shows locally and overseas this Christmas season.

"But I am walking away, and I care zero about the money. I'm used to poverty, and I'm used to eating banana with some prakasah ... . If mi light gone, mi turn on one lamp or light one candle," she added.

Hall also shied away from questions about the amount of money she is turning her back on, saying instead that she wants the focus placed on her new mission of spreading the Word of God.

"I wouldn't tell you all [of] that, but all I know is that a lot of promoters and booking agents are mad at me right now. But I told them it has nothing to do with me; it was never my decision. It just happened," she said.

Hall, the undisputed queen of the dancehall for more than a decade, sympathised with promoters, especially those who had already been advertising their shows with her on the line-up, but made it clear she does not regret taking that step on Monday.

"It's unfortunate for them. I am not sorry because I can't be sorry if God decides that today is the day. I can't say I am sorry, but I've apologised to them that I won't be able to do the shows," she said.

Hall said she was already paying back some promoters the advance fees she collected, while trying to work out agreements with others to perform gospel songs in her vast catalogue as 'Marion Hall', 'Minister Hall' or 'Evangelist Hall'.

With a string of local and international hit songs to her name and at the pinnacle of her career, the often-raunchy Lady Saw turned a new page in her life on Monday when she was baptised at the Emmanuel Apostolic Church in Kingston. It came after she attended the thanksgiving service for late entertainer J Capri.

Lieutenant Stitchie, another former dancehall artiste who, at the height of his career, opted to become a servant of God, cautioned that one of the biggest challenges Hall will face is maintaining the lifestyle to which she has become accustomed.

Stitchie, whose real name is Cleveland Laing, was baptised on December 14 - the same day as Hall - 18 years ago and is "still going strong".

"I was not able to maintain the lifestyle that I had before coming to Christ ... . Some of the things I used to do, I wasn't inclined to do them anymore, and, therefore, that income was cut," Stitchie said.

"There are people who will still expect her to perform as Lady Saw and [want] to pay her to perform in that way. But she won't be able to accept those gigs. So, in that light, her financial income is going to cut drastically," he continued.

But using his experience as an example, Stitchie insisted that God will sustain Hall.

"I have gone through the process where I have lost every single thing, but God keeps restoring me, and I am better off for it," he said, revealing that he has already reached out to Hall.

Stitchie also warned her to embrace the scriptures and brace for those critics who will say, "Give her two weeks to return to her old self."

"They gave me two weeks as well, and here I am, still serving the Lord. The other thing I would say to her is 'Trust in the Lord, not in man'," he said.

Lady Saw, who was baptised before as a 12-year-old, said she always knew she would recommit her life to the Lord, and talked of several "intimate" encounters with Him. She said she has already started to minister to other persons in the entertainment industry.

"The story that I want you to put [out] is that God took up a broken woman like me ... . I am a broken vessel and Him patch me up. It's not about money," she insisted.