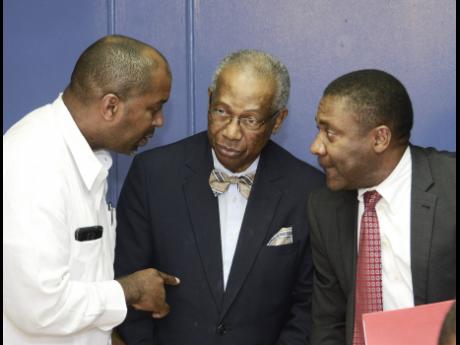 From left, Minister of State Julian Robinson, Dr Winston Davidson, chairman Bureau of Standards Jamaica and Phillip Paulwell, Minister of Science,Technology, Energy and Mining in deep discussion yesterday at a press conference on the findings of a report on arrising from the investigation of gas being sold to motorists.

As many as 17 gas stations across Jamaica have been forced to turn off their pumps for selling bad gas that has wrecked several motor vehicles and left motorists with steep unwanted bills.

Beginning at 5 p.m. yesterday, nine accredited officers from the Bureau of Standards Jamaica (BSJ) were directed to serve closure notices on the 17 gas stations. They were ordered closed last night and more were expected to suffer the same fate, as these gas stations are in the first wave of entities identified after tests proved they were selling contaminated gasolene.

The operators of these stations as well as others could find themselves in legal hot water as the police have also been called in to conduct investigations.

The disclosure was made yesterday at a hastily convened press conference at the New Kingston headquarters of the Ministry of Science, Technology, Energy and Mining.

Portfolio Minister Phillip Paulwell said the affected stations were among those identified based on tests done by the BSJ after complaints from members of the public. He said this was just the beginning, as the BSJ scientists have moved their operations islandwide to include the marketing companies.

"The inspectors of the Bureau of Standards will now intensify their testing across the island. The dispensing of contaminated E10 90 and E10 87 gasolene will be prohibited where they have been found. The Bureau will be utilising the powers that it has to ensure that these stations will not be selling those products for the time being, until the proprietors can indicate to the Bureau of Standards, which will have to be verified by further testing that the products meet specifications," Paulwell said.

Neither the energy minister nor BSJ Chairman Dr Winston Davidson named the stations involved so far, but they are spread across six parishes with the most being in Kingston and St Andrew.

Davidson said other gas stations may be identified in the ongoing saga as more test results are to come in between today and tomorrow. He outlined that 83 per cent of the samples tested so far were found to be contaminated.

"Of the 30 samples, 25 - or 83 per cent - were found to be non-compliant or, in fact, contaminated," Davidson said as he outlined that 45 samples were actually taken and the results would be available by today, but he was giving an early report at the insistence of the energy minister.

Meanwhile, the police have been called in, as Paulwell said his ministry was taking a dim view of the revelations so far. He said the police would be probing as the situation unfolds.

"The Major Organised Crime and Anti-Corruption Agency of the Jamaica Constabulary Force has been contacted and they were present today in our briefing, and they will be engaged to do further investigation in terms of illegal trading of petroleum products and to ensure that the law is properly enforced," Paulwell reported.

Pressed as the to possible involvement of at least one major marketing company, Paulwell was cautious, emphasising that the advice from the solicitor general was that nothing must be done to prejudice business interests as he did his job of protecting the public, but said he would not be afraid to use his powers.

"We are quite clear that we have a responsibility to protect our consumers, and once it is determined that players in the industry are involved wittingly or unwittingly in contaminated products being put on the market, we're going to ensure that we stop it and there are a number of things that we can do [including] revoke licences," Paulwell warned.

News of contaminated gasolene started surfacing over the last two weeks, but ongoing Gleaner investigations indicate that the problem has been around for much longer, with many unsuspecting motorists being affected.