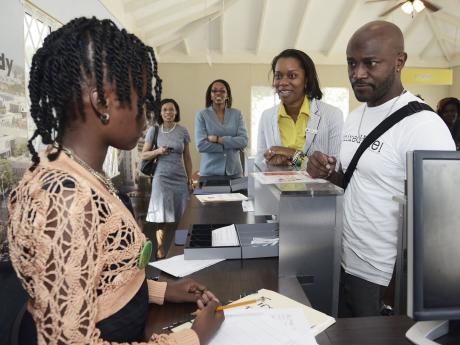 American actor and author Taye Diggs, who came to fame after he made his film debut in How Stella Got Her Groove Back, yesterday expressed surprise at the phenomenon of skin bleaching in Jamaica.

Diggs, who is in Jamaica promoting his children's books Mixed Me and Chocolate Me, says he is focused on issues of self-esteem, self-love and self-awareness.

"This trips me out. I was just told yesterday at dinner that there was an issue with skin bleaching here," the actor said as he participated in the launch of National Career Week at the Junior Achievement BizTown Project located at Caenwood Centre, Arnold Road, in Kingston.

Diggs argued that he was ignorant to the fact that skin bleaching was a problem in Jamaica, which is why he was surprised to learn the practice was prevalent here.

"I didn't think ... those issues were so serious that people are trying to alter how they look," he added.

Diggs hopes that his books will help people with accepting themselves. "We have these lines of self-esteem and self-love and I think those are things we could all use, but the fact that people are still trying to lighten their skin, that is something I think needs to be looked at, and I am hoping that books like these will start a conversation."

Mixed Me and Chocolate Me address issues of racial identity and self-acceptance.

Diggs said Chocolate Me was inspired by his own childhood experiences of being teased about his skin colour.

Diggs' cousin, Shane Evans, who did the illustrations for both books, is confident that the books can help people to accept themselves and change the mindset surrounding the bleaching phenomenon.

"These works can deal with not just the ideal and the surface, but also the inner person as well ... . No one is chocolate in terms of the ideal ... , and no one is black, really. These are just ideas, and I think that us working in the world of publishing is very important, because you learn how words can manifest in society and change people's minds, so we are trying to expand the dialogue around what race really is," he said.

For Diggs, the books have a universal meaning and are aimed at fostering inclusion.

Mixed Me, which is his latest work, was inspired by the experiences of his interracial son.

The release of the book was the subject of much controversy in the United States after Diggs said he wanted his son, Walker, to be labelled mixed instead of black.