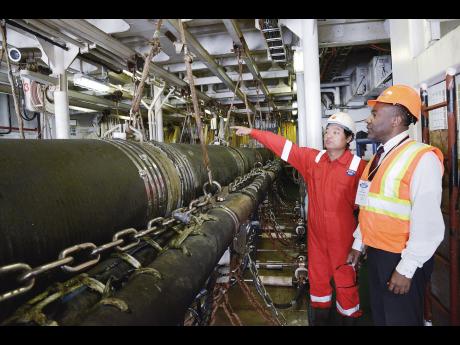 Rudolph Brown
Yang Xiaorui (left) shows Phillip Paulwell, minister of science, technology, energy and mining, an area of the oil and gas exploration vessel that docked at the Port of Kingston yesterday.

International oil and gas explorers are once again in Jamaican waters with the blessing of the National Environment and Planning Agency (NEPA) and promises to the local fishing community.

This time, the explorers are venturing on a data-collection exercise.

The first exploration company in 10 years to re-energise the search for oil offshore, the United Kingdom-based Tullow Oil has brought the gamut of data-capturing equipment for the second phase of its venture.

"This is a major deal for Jamaica's oil-and-gas exploration," asserted Phillip Paulwell, minister of science, technology, energy and mining, during a tour of the vessel, BGP Challenger, yesterday at the Kingston Port.

Paulwell, who was accompanied on the tour by State Minister Julian Robinson, said: "For them to start this work, they had to get approval from NEPA, and they have signed an important agreement with our fisherfolk in the event of any matter for full compensation."

In November 2014, the Petroleum Corporation of Jamaica (PCJ) signed a production-sharing agreement with Tullow Oil (Jamaica) for oil and gas exploration in Jamaica's offshore areas.

"We first started (explorations) in the 1980s when the then Government of Jamaica was responsible for funding," said Paulwell.

He asserted that it has gained momentum with the private sector coming on board with Tullow Oil signing an agreement.

Paulwell told The Gleaner that US$70 million was committed to the project.

"They have so far spent US$10 million, and this exercise will cost them another US$4 million to acquire additional data."

He added: "Although we are convinced that we have oil and gas in and around Jamaica, we really have to pinpoint the location before drilling can take place."

He continued: "They have demonstrated a firm commitment, in spite of the fact that the price of oil has plummeted."

The minister noted that when the agreement was signed 15 months ago, the price of oil was well over US$100 a barrel.

"Today, it is about US$30, but they are still committed, and not only them, since we signed the agreement, others have approached PCJ."

Paulwell disclosed that negotiations are ongoing with another major firm.

"Shortly, we are going to sign another agreement," he said.

"It means that there is a high level of 'prospectivity' and there is tremendous confidence in what we have done so far," he added.

John McKenna, external affairs manager of the London-based Tullow Oil, who has been involved in the project since its onset, said the second phase related to the imaging of the seabed.

"This is the second part, which is the two-dimensional seismic expedition programme."

He noted that it involves the acquiring of more than 3,000 kilometres of additional data.

"We are focusing initially on the eastern part of the offshore where very little data has been acquired in the past."