Past beneficiary hails prayer breakfast ahead of 2016 event 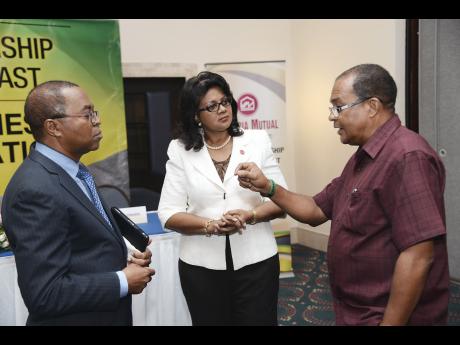 Jermaine Barnaby
The Reverend Peter Garth (right), past chairman of the National Leadership Prayer Breakfast (NLPB) committee, speaks with The Reverend Dr Stevenson Samuels, current chairman of the NLPB committee, and Janice McKenley, senior vice-president and group chief financial officer at Victoria Mutual, during a press briefing on the 36th staging of the NLPB at the Negril Suite, The Jamaica Pegasus hotel, New Kingston, yesterday.

Hear the Children's Cry, beneficiary of the proceeds of the 2010 National Leadership Prayer Breakfast (NLPB), yesterday lauded organisers of the annual event for their dedication to donating to charitable organisations in the past, and encouraged other donors to come on board for this year's prayer breakfast and beyond.

The theme for this year's breakfast is 'Righteousness Exalts the Nation', and this year's proceeds will go to the Eina Schader Home for the Aged.

Patrice Samuels, director of Hear the Children's Cry, said the sum donated to her organisation in 2010 was $245,000 and, though it might not have been a lot of money, in regards to funding charitable organisations, every dollar counts.

She outlined the different activities and assistance programmes her organisation was able to engage in and offer to the needy, despite limited capital.

"As a result of that, we found different things to do, how we could stretch it, and one of the things that we did in 2010, is that we certainly started our internal Ananda Alert (programme) ... parallel with what the Government does, meaning the general Ananda Alert system," she said.

She also highlighted other areas within her organisation, now functional, that were made possible by the NLPB's contribution and that of other organisations.

Samuels said counselling services have been set up to assist families with various issues, and a transportation programme for persons who need assistance but find it difficult to access help due to location and other restrictions.

McKenley stressed that the nation's success and prosperity should be grounded in moral principles that encourage good governance, corporate responsibility, fairness and justice.

"If we are to further advance on the gains we have made in these areas that bring us tremendous concern, we need to do what the 2016 theme says," McKenley said.

"Allow righteousness to exalt this nation so we can help to make Jamaica the place of choice to live, work and raise our families."

Other remarks were delivered by the The Reverend Dr Stevenson Samuels, chairman of the NLPB committee, and NLPB Secretary Clyde Edwards, who encouraged the attendees at next week's prayer breakfast to arrive early.

The 2016 national prayer breakfast will be held at The Jamaica Pegasus hotel on January 21.

Governor General Sir Patrick Allen and Lady Allen will be in attendance.

The Eina Schader Home houses six individuals and has the capacity to house at least 12 persons.

The home is maintained by the Red Cross, which also provides food five days a week for the residents.

The home has a two-person staff and the Bob Marley Foundation is responsible for their salary.

The purpose of the NLPB is to foster greater unity in the nation, particularly among the nation's leaders at all level.