Marva Bernard: An incredible netball journey well worth it 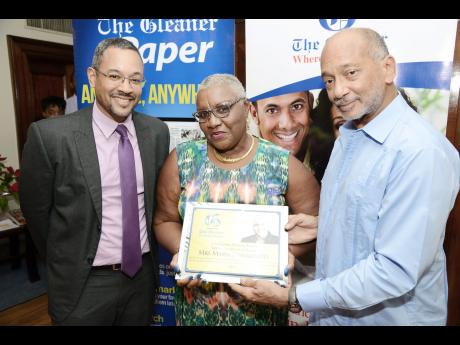 Retired President of the Jamaica Netball Association, Marva Bernard, is well acquainted with the thrill of victory and agony of defeat.

A great thrill for her came in 2011 when the national Under-21 netball team won the silver medal in Wales.

"I remember Simone Forbes telling me that I didn't believe that they could and I can say publicly now that I doubted them," said Bernard. "I had no idea and I remember standing up there and weeping."

Bernard said she was also particularly elated in 2007 when the senior team secured bronze medals at the World Cup and the Commonwealth Games.

"Those are memorable moments, and to see the girls with whom you have started becoming young women and standing on their own," she said as she spoke with The Gleaner after a luncheon held at the newspaper's North Street, Kingston, offices for category winners in this year's Gleaner Honour Awards.

Bernard has been honoured with a special lifetime achievement award for sport.

After years of giving, the very passionate administrator knows what it is to weep joyously and disconsolately.

Bernard recalled the disappointments of World Cup 2011 and 2015.

"For people to say things about you that you don't even know about yourself, with others saying that you can deal with it because your back is broad ... ," she lamented.

As she departs from the court, Bernard says it was all worth it.

"Incredible journey!" she declared in a failed attempt to conceal her emotions as she spoke with The Gleaner.

"I thank the person who nominated me, and then The Gleaner, which felt that I was deserving."

She said it was always a good feeling to be recognised for doing something and "to get up every day and do it just because you gave your word and it's really a proud moment for me, my family and friends".

As a passionate person who is forced to deal with passionate Jamaicans whose standards and expectations are quite high, Bernard said she understood mixed emotions quite well.

"This journey that I undertook 10 years ago has made me a much stronger and better person," she said.

She noted that her predecessor, Molly Rhone, asked her to come on board in 1993, and the rest is history.

"I got involved in managing teams and I am a people person. My friends told me if God had given me one child for myself, I wouldn't have had the time for people's children that I had, and I think it's true."