Technological Solutions Limited: A stellar performer in science and technology 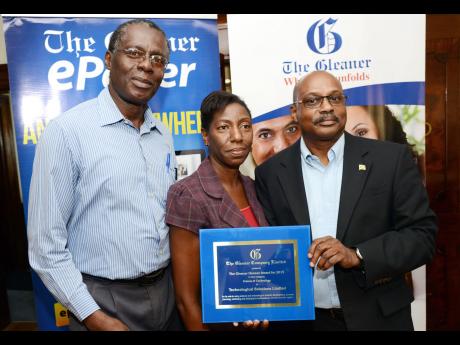 Managing Director of Technological Solutions Limited (TSL), Dr Andre Gordon, may have turned out to be a great Jamaican scientist, but it was not all smooth sailing for the man who leads his team to stellar performances in the field of science and technology.

Gordon readily notes that giving up is not part of his DNA make-up, but there were points when he wondered whether it was all worth the effort.

Nearly two years ago, after the company was formed in 1997, Gordon recalled that the stress of "trying to become a businessman" landed him in hospital.

"I spent a week there but, fortunately, I did not have to undergo an operation, as God was very good to me," he told The Gleaner last week.

He said, however, that the period allowed him to reflect on the path on which he and his team embarked.

"I got the strength and forbearance to move forward."

Gordon said another gigantic challenge reared its head in 2006.

"It was when we had a challenge in the ackee industry," he said.

Added Gordon: "Persons who, thankfully, are no longer in the industry conspired to give the impression that (TSL) was not acting in the best interest of the industry."

He said at the time he was president of the Jamaica Exporters' Association (JEA).

"It felt like a slap in the face after all that we had done but, again persevering, we were able to show that we would save the industry again."

"Whenever I feel the pressure or am tempted to wonder if it is worth it, I just have to look at my staff and be reminded how important the work and their jobs are to them," said Gordon.

He emphasised that youths are also a driving force in his daily endeavours. "Particularly the young people that we have as part of our team who look to earning and making a contribution from the science that they have done at school."

Technological Solutions Limited is the recipient of this year's Gleaner Honour Award for science and technology.