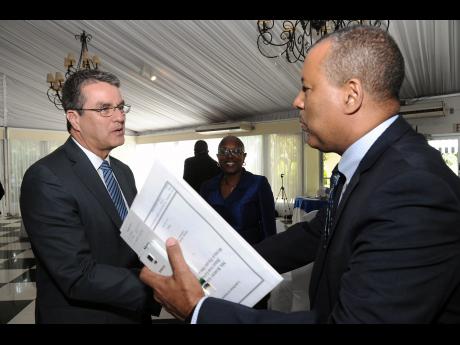 He says Jamaica is developing a good reputation as a country that is willing to do the things that will ensure integration with world trade.

"It is striking for me that trade facilitation is such a large part of the agenda in Jamaica. You can't speak of Jamaica without speaking of trade in the same sentence. It is a small economy and one that is well positioned to be connected with the regional and international markets," the WTO director general said.

He was speaking at a luncheon put on by the Trade Facilitation Task Force at the Terra Nova Hotel yesterday. He says his examination of Jamaica's trade status and facilities has shown that Jamaica is on the right path in benefiting from increased world trade. Carvalho says Jamaica is making the right moves and emphasising the correct things in positioning itself.

"I am absolutely sure that the Government has the focus that it should have. We see improvement in the ease of doing business, with Jamaica moving up in the rankings by several points, and that is very important. The cost of trade is going down; turnover times at the ports are going down and the Special Economic Zones are something that further pushes the country into greater integration with international markets," Carvalho said.

He urged Jamaica to continue along the stated lines and to ensure that it ratifies the Trade Facilitation Agreement of the WTO and, in doing so, act in concert with regional neighbours. He said Jamaica "cannot sit back and wait for the stars to align," as it will run the risk of being left out of important decision-making processes. At the same time, the WTO director general says Jamaica's participation in WTO discussions is commendable. He is urging Jamaica to leverage the relationships formed so that they can influence outcomes.

Carvalho is on a 36-hour visit to Jamaica. He toured the Kingston Container Terminal in addition to meeting with a number of stakeholder interests including Government, the private sector and academia. He leaves Jamaica this afternoon.