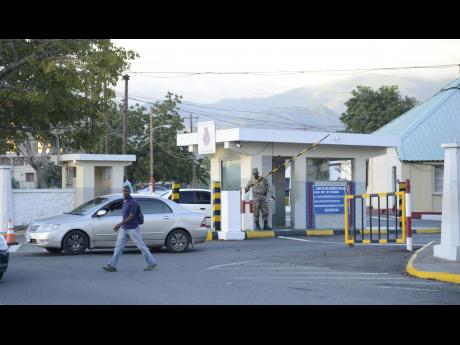 The Jamaica Defence Force (JDF) has warned that an unprecedented attempt by the Independent Commission of Investigations (INDECOM) to search the army's Up Park Camp headquarters could prejudice the public interest.

The assertion by the JDF is one of several reasons it is fighting a warrant obtained by the Terrence Williams-led INDECOM to search its headquarters for mortars and information related to their use during the May 2010 operations in Tivoli Gardens, West Kingston.

"The JDF, while recognising the independence of INDECOM and its authorities, is of the opinion that the request be the subject of judicial review as it is not in keeping with national security imperatives and prejudices the public interest," army spokesman Major Basil Jarrett said yesterday in an emailed response to The Gleaner.

It came hours after law-enforcement sources disclosed that in addition to the search warrant, members of the JDF have been summoned to appear before the oversight body for interviews about the use of mortars during the 2010 operation.

It is not clear when INDECOM secured the warrant or drafted the summonses, but according to one source, they were obtained using information that came out in evidence before the ongoing West Kingston Commission of Enquiry.

The tribunal is probing the conduct of the operations in which more than 70 civilians and one member of the JDF were killed.

Jarrett, who heads the JDF's Civil-Military Cooperation Unit, confirmed that the army received the search warrant from INDECOM on December 22 last year and took a shot at the oversight body, charging that it requested documents and other information that "materially overlap with a directive of the COE [commission of enquiry]".

"INDECOM has standing at the COE and were instrumental in the request made of the JDF by the commissioners to produce specific documents by a certain time. INDECOM's request is not only out of step with the timelines established by the COE for the JDF to comply with this directive, but has also raised other matters of critical importance," Jarrett underscored.

Yesterday, attorneys for the JDF, led by Queen's Counsel Walter Scott, appeared before High Court judge Bryan Sykes with an application for leave to take their case to the Constitutional Review Court. The request was granted after a near three-hour closed-door hearing, which involved attorneys for INDECOM.

"Round one to the JDF," one attorney in the case said as he left the Supreme Court building.

Days after the operations, which were aimed at capturing drug kingpin Christopher 'Dudus' Coke, residents of Tivoli Gardens insisted that they heard 'bombs' falling in their community, but the army denied the use of mortars.

However, giving testimony before the Sir David Simmons-chaired commission, retired JDF Chief of Defence Staff Major General Stewart Saunders acknowledged that he authorised the use of mortars and said that 37 were fired into three open spaces.

Stewart and the army's mortar fire controller at the time, Major Warrenton Dixon, defended the use of the mortars, explaining that the intent was to disorient armed thugs who were engaging members of the security forces in fierce fire fights and keep women and children out of harm's way.

"It's unfortunate that 70-odd persons lost their lives in there, but I believe strongly in my heart that the use of the mortars saved a lot of lives, and I am proud of it," Dixon testified last month.

Jarrett noted that the JDF has sought to abide by the rulings of the three-member tribunal and will continue doing so but warned that where those directives run counter to national security imperatives and prejudice the public interest, it will seek judicial review by the constituted authority.

He said that with the case now before the courts, the army would not make further comment on it.