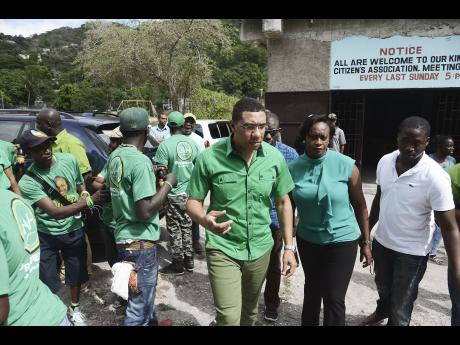 Leader of the Jamaica Labour Party (JLP) Andrew Holness has issued a warning to the Portia Simpson Miller-led People's National Party (PNP) Government that the party will not sit by and allow the people of Jamaica to be duped into a pre-budget election.

Holness suggested yesterday that the Government was rushing to get the general election, constitutionally due in December, out of the way, ahead of the upcoming Budget presentation that is likely to have grave implications for Jamaicans.

"We will not sit by and allow the people of this country to be tricked at a time when a national budget process should be foremost on the Government's agenda," asserted Holness.

At the time when the People's National Party (PNP) will be holding its mass rally in Half-Way Tree, St Andrew, on Sunday, Holness is scheduled to take to the airwaves.

JLP General Secretary Dr Horace Chang said Holness' broadcast to the nation will set the tone for "whatever comes during the course of the year".

Speaking with The Gleaner during a tour of East Rural St Andrew yesterday, Holness suggested that the sudden haste by the PNP Government after last year's false start, appeared suspicious.

He called on Simpson Miller and campaign director Dr Peter Phillips, the finance and planning minister, to be honest with the electorate.

"We are demanding that the Government come clean with the people of this country," he said.

A second false start or not, Holness declared that the party he leads will not be caught napping. "We are well prepared as we are on a 21-day election watch," he said.

Holness accompanied his wife, Juliet, during a tour of the East Rural St Andrew constituency on which she has set her sight in the upcoming polls.

Chang, who was on hand, along with campaign architects Mike Henry and Karl Samuda, declared that they were not perturbed by claims that the election date would be announced on the weekend.

For her part, Juliet Holness was ecstatic about the reception of the constituents she hopes to represent in Parliament.

"Most of the people are usually out during the days," she said. "A lot of them are riled up and preparing to head down to Bull Bay (the meeting place) at the end of the tour."

Asserting that the spirits in East Rural St Andrew are high, Holness said: "I realise that once I come into the area, it wakes up like ants nest," she chuckled. "Everybody is up and ready to vote; they are happy that they going to be getting good leadership."