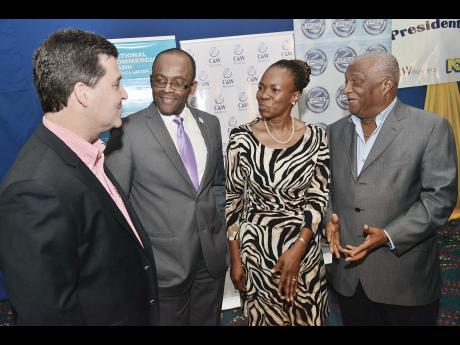 In light of news that the Gaston Browne-led government of Antigua and Barbuda has abolished personal income tax in that country, the Private Sector Organisation of Jamaica (PSOJ) has added its voice to calls for Jamaica to do the same.

Speaking at the first President's Forum for 2016, the chief executive officer and the president of the powerful private-sector group have pointed to the economic benefits of abolishing the income tax.

The president, William Mahfood, described as bold the actions taken by the Antiguan government to abolish the tax.

"There is an opportunity for us to look at doing something similar with replacement of more broader collection on general consumption tax," he said

CEO of the organisation, Dennis Chung argued that the PSOJ had been advocating for the removal of the personal income tax for some time now.

Pointing to the recommendations which came out of the Joseph Matalon-led private sector working group on tax reform, Chung argued that more revenue can be earned by abolishing the personal income tax and replacing it with broader consumption type taxes.

Chung also disclosed that the private-sector group would be re-engaging discussions in regards to the personal income tax and called on the Government to be bold as it continues to implement tax reform.