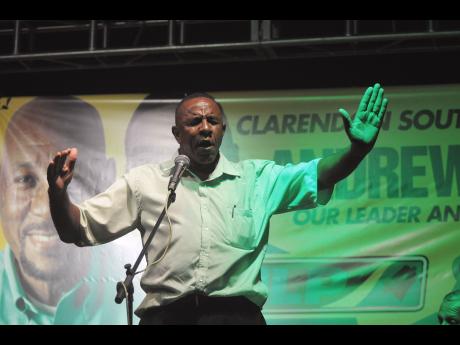 A clergyman last night sent up prayers to God asking him to cause People's National Party supporters to vote for the Jamaica Labour Party (JLP).

Reverend Leroy Palmer, councillor/ caretaker for Hayes Division, while praying, told God that the JLP has to move Jamaica from poverty to prosperity.

"Go ahead even now and soften the crowd, go ahead even now and feed their minds. ... even those, Almighty God who are standing on the side of the People's National Party. We pray that there be a conversion tonight as we seek to enlarge the amount and the interest of the Jamaica Labour Party," Palmer said.

He told God that His intervention was necessary as Jamaica needs to be put on a pathway to prosperity.

Meanwhile, Rudyard Spencer, the chairman for the Jamaica Labour Party Area Council Three, said last night that his party will win all but one seat in Clarendon.

Spencer, a three-term Member of Parliament in South East Clarendon is under pressure from the PNP's Patricia Duncan Sutherland to retain the seat.

But he told The Gleaner last night that the PNP had better perish the thought of unseating him.

"I don't know that she is making any grounds, what I do know is that on election night, I will be declared the winner," Spencer said.

Spencer, who is defending a small margin of 107 votes, used a mass meeting in Lionel Town to show his strength last night.

The meeting is the second major meeting held in the parish since election campaign heated up three months ago.

JLP Leader Andrew Holness yesterday led a tour across the six-constituency parish, seeking to boost the Labour Party's chances there.

But the JLP, by gathering in Lionel Town, South East Clarendon, has telegraphed that it is on the defensive in that seat.

Only Peter Bunting, who beat former Prime Minister Hugh Shearer by 1,443 votes in 1993 and Basil Burrell who won in 1997 have been successful on a PNP ticket since the constituency was created in 1959. Before that, when most of it formed Southern Clarendon, it was the domain of Alexander Bustamante.

Bunting stayed for only one term as MP, and his PNP successor, Basil Burrell, won by only 54 votes in 1997. The next time he faced the voters Burrell was kicked out. That time they replaced him with Spencer.

However, in 2011 he barely survived the challenge of Derrick Lambert, getting home by 107 votes.

Spencer told The Gleaner that the margin was close because Labourites did not vote. He said they were eager to come out now to secure a fourth term for him.

In addition, Spencer said the JLP will win five of the six seats in the parish which would be a repeat of the 2007 results.

Noel Arscott was the lone PNP elected to Parliament in 2007, and the JLP has promised to repeat the feat this year.

But in addition to Spencer, the PNP is targeting Pearnel Charles in North Central Clarendon. He is being challenged by Dr Desmond Brennan.

Prime Minister Portia Simpson Miller will lead the PNP to Half-Way Tree on Sunday where it is expected, she will announce the general election date.