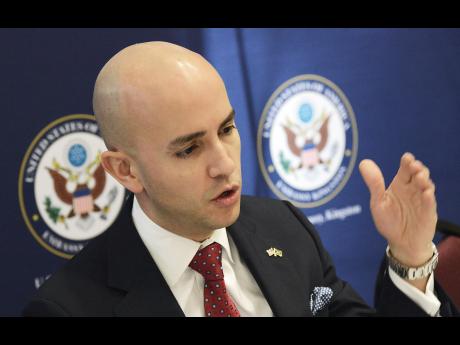 Jamaica's economic programme yesterday attracted sweeping endorsements from a high-ranking United States (US) official even as he issued an assurance that his government was not concerned about the outcome of the upcoming polls.

"The future of Jamaica is really up to the Jamaicans; your political future is, therefore, for you to decide," asserted Juan Gonzalez, deputy assistant secretary of state, Bureau of Western Hemisphere Affairs, at a press briefing at the US Embassy in Kingston.

Noting that the US is entering its own election season, Gonzalez said: "In the same way that US voters will determine the next president, the Jamaicans decide their next prime minister."

Gonzalez, who departed the island after yesterday's exchange with journalists, following his three-day visit, stressed that the US is more focused on "process" than the outcome of the general election being contested by the governing People's National Party and the Jamaica Labour Party.

"Jamaica's prosperity and security, as well as the successes of broad-based economic growth of this country and its national security is in the interest of the US," he said.

The US official urged continuation on the path being undertaken to rescue the economy.

"True leadership is making the decisions that you think are right for your country when sometimes it may not be the easiest decision politically," he asserted.

But he was quick to point out that US relationships with successive governments have been "great" and he does not envisage any changes.

Gonzalez asserted that the current administration was "already a star performer" in the programme with the International Monetary Fund (IMF).

He said that there were few places in which the relationship with the US was as strong and broad-based as it was with Jamaica.

"I think that the Government, in making sure that it gets its fiscal picture in order, is already sending the message to the private sector, not just in the US but in other parts of the world, that Jamaica knows how to manage its economy," asserted Gonzalez.

"We have been looking at what can be done to make sure that the rule of law in Jamaica is one where the three million Americans who visit annually know that the security situation is stable," he said.

Gonzalez, who was in Jamaica for talks on bilateral and regional affairs, spanning economic partnerships, security cooperation and development, noted that US Ambassador to Jamaica, Luis Moreno, has been cooperating with the Jamaica Government to support the security programme.

"It's not just a security situation, but to make sure that when an investor comes through to do business, that contracts will be respected, and that their investments are safe in this country," said Gonzalez.

He said that one of the defining factors of the US' economic prosperity and successes arising from the global financial crisis is that investors coming to the US can be assured that their money is safe.

"I think it is something that Jamaica is doing and it is taking additional steps, which include the passage of the Anti-Gang; asset forfeiture (Proceeds of Crime Act) and lotto scamming legislation that provide addition tool for law enforcement to address these challenges," said Gonzalez.

He said with US firms investing US$150 million, it is just the tip of the iceberg. "Jamaica is doing everything it is supposed to do to attract foreign-based investment," he said.